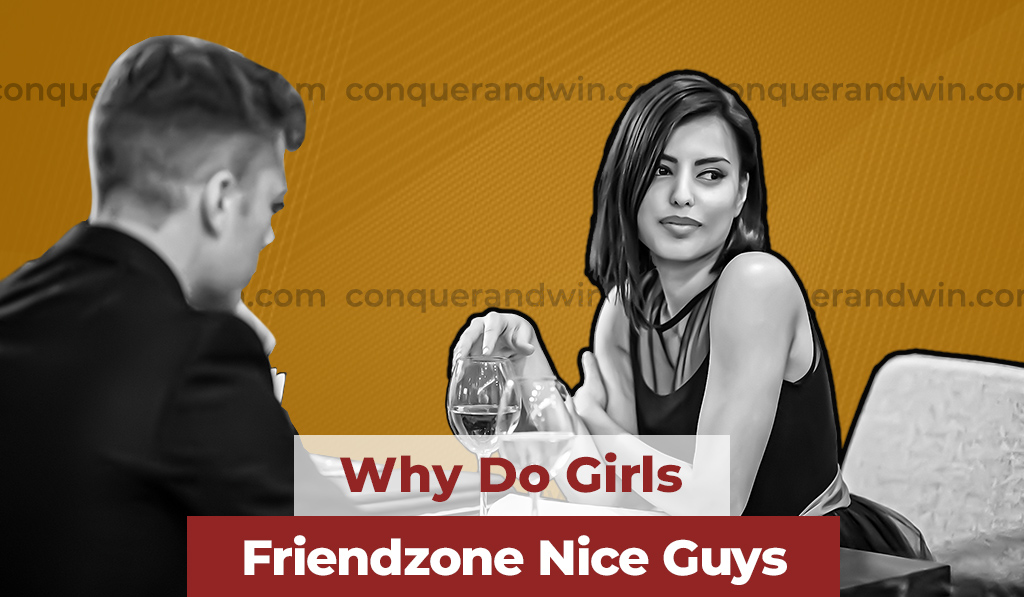 Why Do Girls Friendzone Nice Guys? (Avoid This Mistake)

Are you a nice guy, and girls keep objectifying your mind and not sleeping with you?

If so, you're probably asking, why do girls friendzone nice guys?

And so much more. Let's get into it.

Why Do Girls Friendzone Nice Guys

Girls tend to friendzone nice guys for several reasons, but typically it's because of passive behavior.

They kill any sexual vibe by not taking charge, and they try too hard to be nice and please everyone instead of getting sexual.

From the conversations I've had over the years with clients and people who've contacted me, typically nice guys are focused on the wrong things.

Here are some mindset mistakes nice guys make which get them friendzoned:

I'm not saying it's about doing the opposite, because that's definitely not true. But very often nice guys focus everything on respecting women as they're too worried about offending anyone.

That's sort of like being a boxer in the ring and just focusing on not getting punched instead of focusing on winning.

I want to put another perspective from another example: when you go buy groceries and check out, your focus isn't on respecting the cashier.

Obviously, you're not doing the opposite or disrespecting the cashier, but your focus is getting your groceries.

Respecting the cashier and being polite is just part of buying your groceries, it's not something you think about.

There are a lot of guys getting laid out there and they're not doing it alone, except in some cases. But that's a different story.

Although women, generally speaking, will be more focused on relationships overall, a lot of women are also interested in other types of relationships and sexual relationships, too.

So, as soon as you start dating someone, your automatic assumption shouldn't be that she wants to marry you now.

#3. Thinking You Need To Go Slow

Typically, guys who are going slow are worried about being offensive.

They don't want to do anything because they're worried they're going to scare her away, but the opposite is usually true.

Just because you go for it doesn't mean you're going to get it. But you need to make some kind of move and go faster instead of slower to show what your real interests are.

Basically, this philosophy is all about friendzoning yourself.

If you go try to be friends with every woman, that's usually what you're going to end up with.

Sure, there are stories of guys who end up in a relationship with a girl after becoming friends, but these are usually few and far between.

Most guys who take this route will end up being friends, and that's where they're going to stay, because the friend vibe and the romantic vibe are two very different things.

#5. Putting Women On A Pedestal

The easiest way to make her out of your league is just by thinking of her as something special, some superhuman being.

The minds of women are just as dirty as the minds of men. We're all interested in sex, but some people just talk about it more.

Typically, men will be in that category, but women are thinking about it too.

If you make her take the lead and make all the decisions, it makes you look passive and indecisive.

To correct this problem and do the opposite of what gets you friendzoned: take risks, be assertive, and go after what you want.

For more info on being friendzoned, check out this post.

Mindset Mistakes That Get Guys In The Friendzone (Summary)

Your mindset contributes a lot to how women see you, so here are some mindset mistakes you need to avoid if you don’t want to get friendzoned:

How to Beast: Is David de la Morenas the Real Deal? (How To Know If You Need His Advice) »