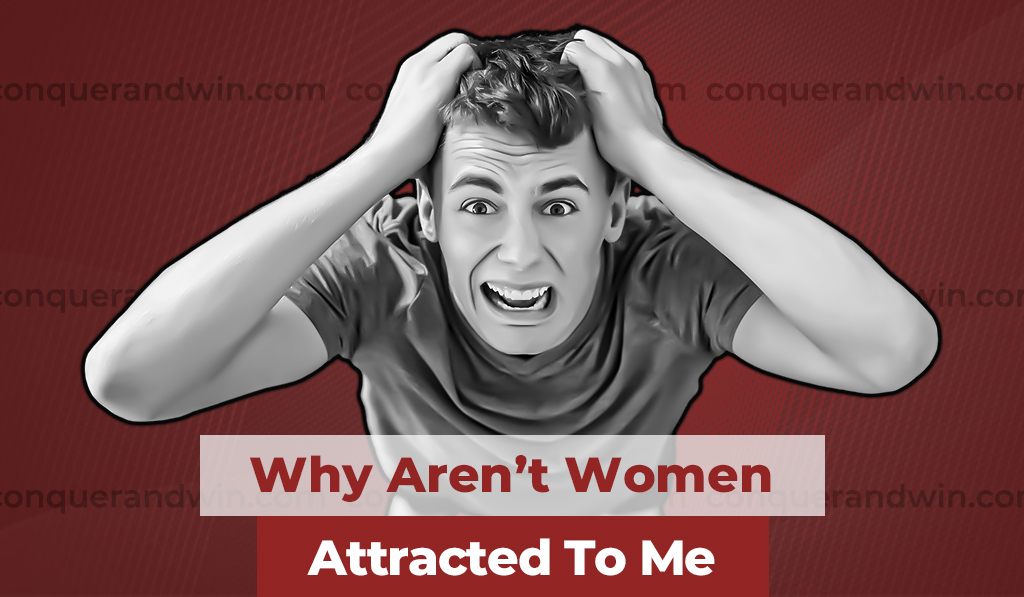 Why Aren’t Women Attracted To Me? (QUICK FIX)

If you're having problems attracting women, then this post is for you.

Learn the keys to attraction so you can stop asking the question: why aren't women attracted to me?

And a lot more. Let's jump into it.

Why Aren't Women Attracted To You?

Attraction is not random. There are certain factors which affect it and some of these things are out of your control.

A lot of things are actually in your control, some of which are physical, but a lot have to do with your personality.

So, let's learn some of the reasons you may not be attracting women.

The Top Reasons You're Not Attracting Women

Hygiene is really important. Probably you specifically don't need a reminder on this, but some of you do.

A friend of mine who's a dating coach took out a client one time.

He literally had to get him to go to a drugstore and get a nail clipper and cut his nails and clean under his fingernails because it was disgusting.

That's not going to be most of you, obviously, but there are different things you can do.

I had a client come over and visit as well, he flew over from the States.

I was surprised because his hair hadn't been cut in a couple of months and he didn't really have it done up or styled in a way that he could make himself look a lot better.

Also his beard wasn't trimmed. Nothing wrong with a beard, but it was messy. Basically, he had a messy look going on.

I got him on the schedule with a barber that I used to go to and the next day of his boot camp was way better.

Posture is a big one.

Sometimes, especially shorter guys who complain about being short, also have bad posture.  This is also going to affect guys who are taller as well.

If you're leaning forward, if you're crane-necking, looking at the ground, hands on your pockets, your shoulders are forward instead of being back, you're going to make yourself look a lot smaller.

Looking like you have confidence, and actually having confidence is really big on the list for attraction, for the ways guys attract women.

It's something that doesn't have to be very fancy for a man, you don't need expensive clothing, but you do need a good pair of shoes and clothing that fits properly.

Now, there's a lot of different ways to style, so I'm not going to really cover it here.

It'd be a good idea to check online or check with somebody you trust who has a good sense of style to see what you can do for yourself or if that's an area you need to work on.

This is something I see a lot when I take clients out.

As soon as they approach a woman that's really attractive, the strength through their voice and their tone just plummets. It goes right off a cliff.

Even if they're kind of a manly man with a strong voice, they turn into Mickey Mouse as soon as they're face to face with a really attractive woman because they lose their confidence.

As soon as your voice plummets, it doesn't look confident. Plus, a strong voice is authoritative and being authoritative is attractive as well.

Men also get resting bitch faces walking around with a frown.

That frowny face isn't going to be making anybody smile back at you. In fact, I see this all the time.

I took a client to a coffee shop, asked him to get a glass of water and I noticed the reaction that the baristas, two cute baristas, had to him when he walked over there.

It wasn't just his frowny face, he also had other things going on that were negative, but he also but he had that resting bitch face on and that's basically what they mirrored back to him.

When I went in there, I talked to them, did the same thing, ordered water, didn't do anything special.

I just smiled at them and a few other factors, but the smile was probably the biggest one. They smiled back at me instantly.

If you're walking around and you're wondering why people are being so negative to you, that's going to be one of the things you're going to want to look out for. And obviously, a good smile is attractive as well.

Fitness takes some time and dedication, but you don't have to be in the gym all day.

It's also going to pay off big dividends for how you feel about yourself or confidence.

I'll even help your style because you're going to be able to get clothing which fits better, makes you more comfortable and more confident. And hey, who doesn't like a fit body? That goes for both men and women.

One of the big things I see a lot of guys who don't have a lot of confidence is they avoid eye contact, or at least their eye contact is not super strong.

Strong or good eye contact shows a lot of confidence and it's also one of the keys to attraction.

You want to be able to hold eye contact with a woman when you approach her, when you start a conversation, and then especially when you're on a date.

One small study I read years ago about eye contact took a bunch of strangers and put them face to face to make them look at each other for four minutes or something like that.

Complete strangers who had never had a conversation before. Just with eye contact alone, they were able to create feelings of attraction.

If you don't have some courage to go and talk to somebody, you can't act boldly and just go after it. Basically, you're going to have a lot less opportunities.

Plus it's also a lot less attractive when a guy is really timid. Getting more courageous, growing your balls, and taking chances is going to be a big step and it's going to give you a lot more opportunities.

To put everything together really well and to make it work, no matter how good your style is or the courage you have, you're going to need some social skills.

That means the way you communicate with other people has to be effective, but you need to be able to communicate in a way that they understand.

If you're interested in somebody you want to date and you want a romantic thing, you can't communicate in the same way you communicate with friends.

Social skills also include etiquette and other things like that, but this is a big one that kind of glues all the other pieces together.

If you're not attracting women, chances are you don't have that much experience with them either.

Things like social skills, eye contact and having better posture around people, or being more confident overall, it's going to come from experience.

You have to also have the right mindset to put that experience together in a way that's not going to be a weight on your shoulders. You have to be able to handle rejection, basically.

Lack of experience means you're probably not going to know what to do with women and that's going to be a big factor too, which is going to push them away often.

If you're needy and you get an opportunity for a date and you start acting clingy, you’re basically contacting too much in the beginning, showing too much interest, like you have nothing else going on.

The fact that you're just way too into her is going to set off our own red flags for most women.

A lot of neediness is going to come from not having options, obviously. If you get one option, you're going to get kind of desperate for it.

It feels like you haven't had an option in a long time and you've got to do everything you can do to get it.

You get this one woman and it makes it seem so much more important than it is, even though in reality, if you had other options, you probably wouldn't be so needy.

This happens often. Guys will treat the woman they're interested in as friends and that's what they get back raised.

It's just basic mirroring. The cues which attract women aren't going to be there because they're acting too nice and trying too hard to be a nice guy.

There's nothing wrong with being nice, but being that "nice guy" is going to push a lot of women away because they're all going to think you're just a good friend.

To learn more about attraction, check out this post.

And also, for more tips on how to deal with friendzone, check out this post.

Have you got any comments or questions?  Leave them below.