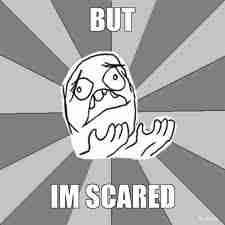 These are a few of the lies I hear over and over again from guys who are masking their fear of rejection instead of taking the bull by the horns (instead of the bull taking you by the gonads).

I can empathize with these statements because I've struggled with my own anxieties which took me many years to overcome before I could really say that I had this handled.

The mind is an excuse machine (Think Rob Ford & Richard Nixon), and will create a sort of invisible wall right before your eyes as soon as you even think about trying to approach a beautiful women who is walking by.

It's a bit of an invisible kick in the jolly stopping most men from making a move when you're torn between you're desire for your own Swedish bikini team, and shrinking testicles at the thought of public humiliation. Picture the scene from A Christmas Story when the main character finally get's his Red Rider BB Gun and shoots himself in the face.... “You'll shoot your eye out! You'll shoot your eye out.....” Yeah baby, that feeling.

Our irrational fear knows no bounds in it's incessant quest to keep us bound and gagged from expressing our desires publicly, to a complete stranger.

The “Women in Vancouver are unapproachable” is a great example of the mantra of neutered men protecting willy from further shrinkage.

Or how about the “Seattle Freeze,” a great excuse which Seattle’s men use as the grease that keeps their ego intact and their dating lives, if it even exist, subdued.

“Oh, other places are much more social! I went to so and so and I was a rock star....” Unlikely, but a nice rationalization which I hear frequently. I'm not saying that some places don't have a more social culture, but the chains that keep Vancouver men down have nothing to do with a lack of social women.

Men who want real change will come to me so they can change their OWN behaviour and gain awesome skills (Always focus on your own actions). The guy's who don't settle for excuses are abundant even in the face of a city which keeps advertizing how bad the dating scene is here.

So what are the most common things I hear from clients who I take out to learn X-Man style superpowers with women? I've mentioned a few of them already but below is my list in all of it's glory-hole. Oops, hard to shake name association.....

Back to the list, I've named Vancouver men but most of these really applies to men, period.

Most of the time anything you could think of is just an excuse. There is literally no barrier to talking to anybody in any public setting. When the auto-response goes off in your brain take a chill pill and look at it for what it is, an excuse. You need to stop believing your own bullshit before you can start learning.

9 Ways To Get Over A Bad Breakup Work On Yourself »