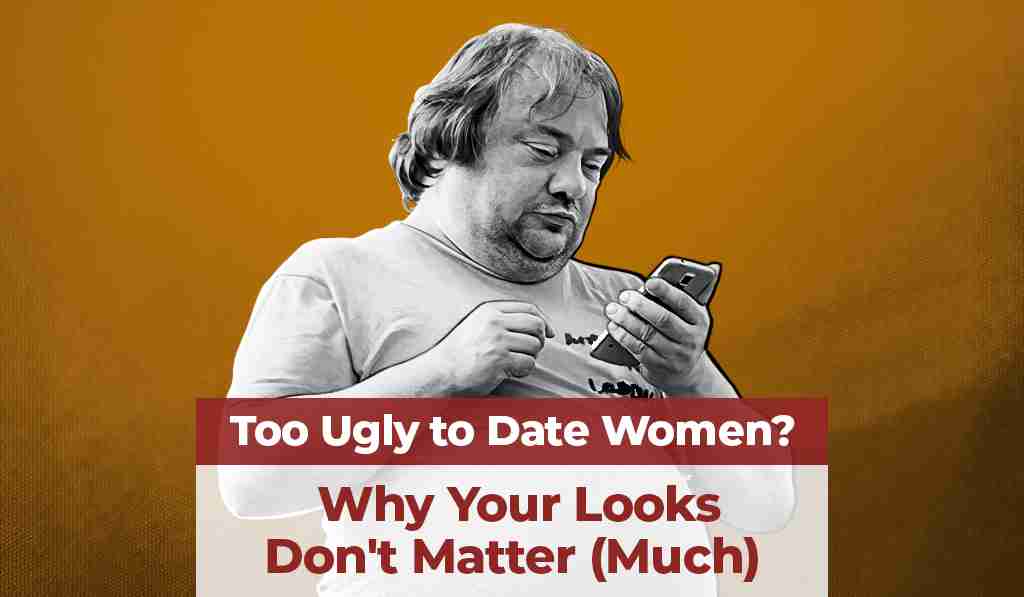 'Too Ugly to Date Women? Why Your Looks Don't Matter (Much)'

Are you a guy who is worried about your looks? You think you're either ugly or you're too average for the kind of beautiful women you want to date or have a relationship with?

If that's the case, stay tuned, because I'm going to explain exactly why looks do not matter if you're a man, what women actually find irresistible and what you do if you're an "ugly" or an "average-looking" man.

So I actually get this question a lot and I have a client right now who is concerned about his looks. He thinks he's ugly. He upgraded himself to average when I asked him to think of it, why is he "ugly"?

And I received a comment on one of my YouTube videos recently about, 'does it matter if you're ugly?' or something to that effect. And I've heard it many, many other times.

Guys are worried about their height, being overweight or they're ugly or average. You know, these are all self-perceptions, not necessarily what other people think about them.

However, these men and there could be more, as well, are very preoccupied about looks and worried that they're too unattractive or too average for a beautiful woman.

And this is a great example of how mindset actually holds most men back. It's completely a way of thinking here, which is holding these men back, not their looks.

And part of the problem besides self-esteem or confidence, which I'm going to cover, is a misunderstanding of how women find men attractive because men are judging women in a certain way. We're judging women by their looks and how we're attracted to them, which is physically.

And it's not that looks don't matter at all because looks can have an effect for sure. It can be really helpful for a first impression, and in the long run as well, to maintain attraction.

But it's not the main thing women are looking for, and it's more of a bonus than a requirement. You could be a butt ugly man who's oozing with confidence and get the most attractive woman.

I have seen this over and over again, and I've had clients before who you would look at and think that guy is never going to get an attractive woman.

One example, I like to use is one of my former clients, who is this middle aged Chinese man who was very short, had a little bit of a potbelly, very average looks maybe for a Chinese man is what you would think of a man from from China... Very strong accent and not very well dressed.

He started getting dates with women much younger than him and who are very attractive as well. And that's just one example. There's tons out there. I see it in the street all the time.

This is just another example of how looks don't matter, because there's other things that women are looking at.

You'll never see men going after a really ugly woman with status just because they have status, because that doesn't matter to us.

Because when it comes right down to it, women are attracted to balls. They want a man who is bold and confident, someone who is willing to speak his mind and not back down when he's challenged.

So if you think you're too ugly or too average to get an attractive woman, you really need to start working on your mindset.

But there's also a few other things you can do to improve your overall confidence, including working on your looks. Because when we take care of ourselves and we actually pay attention to our looks, it makes a difference.

So in no particular order of importance, I'm going to go over a little list here of things you can work on right now to improve your confidence and improve your looks as well, and start getting dates with attractive women, the women who you think are out of your league right now.

Work on Your Appearance

So number one, work on your appearance. Now, if you're really overweight, that's obviously something you're going to want to work on.

Nobody's going to feel good overweight. Well, I've never been really overweight in my life, but I know when I've put on a little bit of weight around my midsection because of an overindulgent and not exercising enough, it's never felt good.

It's not something that makes me feel more confident, for sure. Now, having said that, there are some guys out there who have plenty of extra weight and are doing really well, and women, too.

So that shouldn't be the number one thing that holds you back from women. However, work on your fitness, work on your health, because that will make you feel better and give you more energy too, which will also make you more attractive.

Get in the gym and start working on your diet. If you don't know what to do for diet, there are so many opinions out there. Talk to a nutritionist and stick to one diet.

Just don't keep on dieting. It's probably the wrong word to it. This is more of the lifestyle you want to go and don't do some crash diet or do something else and torture.

You should be eating food that actually tastes good but is also healthy as well. An important thing that affects your appearance is your clothing.

As men, we don't need a dress fancy. Just wear something that fits. Really baggy clothing just hides your form and you might be hiding your form because you don't feel very confident, in which case, again, go back to the gym.

But if you have some clean basic clothes that fits well, good jeans, good shoes. Especially, it is the number one thing for men style is really having clean good shoes. They don't have to be expensive, and the same for fashion and what to wear that is going to look good on you.

If you really don't know, then go ask for somebody's opinion. Go talk to an attractive girl whose opinion you trust and try to start learning what looks good on you, what feels good on you, as well.

Number 2, work on your posture. Posture has a huge effect on how other people are going to see you and how you feel about yourself. Bad posture looks like a lack of confidence.

Bad posture will make you feel a lack of confidence. If you're walking around with your hands in your pockets, looking at the ground and maybe your shoulders are rolled forward, which compresses your chest and doesn't allow you to even breathe properly.

So, work on your posture, because that's something that can immediately affect the way you perceive yourself and the way other people perceive you. And sometimes bad posture, and maybe most of the time bad posture is going to be some result of not having the right strength in the muscles that hold you up properly.

Years of bad habits of rolling your shoulders forward to maybe put your head down, looking at the ground all the time is going to affect the way your muscles hold you up.

So we have to work on that for a while. And also in the gym, you could do exercises to help improve your posture and you can find plenty of videos about that online.

And also keep your chin up just a little bit when you're walking around. Don't walk around with your head down. Even if you stop looking at the ground, you're looking forward, it's harder when your chin is tilted down.

So put your chin up just a little bit like you're some arrogant person, and even though you're not, but it will help you feel more confident and it'll help you look more confident, as well.

Stop telling yourself these negative statements because all you're doing is reinforcing that in your mind and making yourself believe it.

But find a phrase or statement to replace the 'I'm ugly' or 'I'm too average'. Something that kind of resonates with you, something that feels right, right now.

Stop telling yourself that lie that you're too ugly or too average for women. And number four, work on actually meeting women. Work on your social skills and your confidence, communicating directly with women.

This will only improve by talking to women. And so you've got to get out there somehow in some situation where you're going to be able to talk to women.  And that could be starting very light.

Just say hi as you walk down the street and somebody passes by when you're in a line up at a coffee shop, waiting for your coffee, say something to the person in front of you or behind you, just something very innocuous about the environment you're in or whatever it may be or could be with the coffee or anything.

You just ask a simple question, it doesn't matter. You got to get yourself used to talking to other people. Doesn't just have to be women. But obviously, you're going to want to have direct contact with women as well to really boost your confidence with them.

And that could also be at parties or social events and gatherings, although a lot of that may not be happening right now. It will happen eventually. And there's some of that stuff going on anyway.

So take advantage of any opportunity you get, to talk to anybody around you, even women you don't find attractive. It doesn't matter, just talk to anybody who is near you and put yourself in as many situations as possible so you can get that social practice. That's going to really boost your confidence.

And that's also basically what I help guys with, as well Directly, I take guys out and I show them how to talk to women. I demonstrate and do lots of fun stuff like that, give feedback on approaches and conversations so guys can learn faster.

Also read: How to Handle Rejection From Women

So if you want direct help through coaching, then contact me on Conquerandwin.com and contact me through the forum or on the coaching page where there's more information on coaching as well.

In any case, that's all for today. And until next time, Conquer and Win.

SHOW ME
10 Reasons Why You Should Hire a Dating Coach »