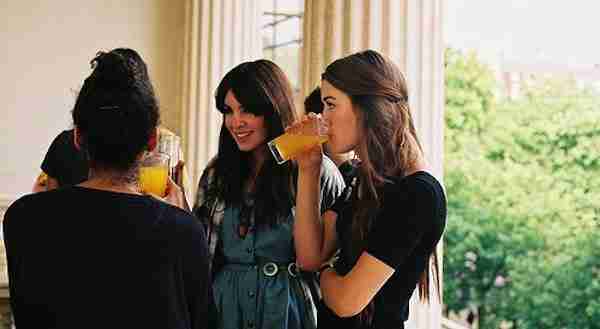 Talk Is Cheap: How Your Body Language Is Worth A Thousand Words

With my head cocked slightly to the side exposing my neck, eyes connected to her eyes and hands making open inviting gestures, I could see she was starting to warm up.

Initially, there was a strange expression on her face when I said hello on the street. I was just another stranger, potentially intimidating. I stepped back to create space when her upper body angled away as she tried to assess the situation.

Within only a few minutes, we were no longer acting like strangers. Although her words were mundane as she was explaining the new job she just got, the comfort that developed could be felt and seen.

It was just like talking to a friend. She stepped closer towards me and no longer was standing at an angle, creating a private conversation bubble for the two of us.

Nobody else on the street walking by would ever be able to tell we had just met five minutes earlier. Very few words were spoken, but so much was said.

When communicating with another human being, most of us stay inside our heads, focusing only on the words coming out of our mouths and ignoring our other senses.

Our eyes can tell us so much more about a conversation than words when we choose to pay attention.

Learn to tune into the world right in front of you, and you can experience a deeper level of communication. Our body language is worth a thousand words. Even the meaning of the words we use are drastically altered by the way we use our voices.

Most people are oblivious to the majority of what is being communicated in a conversation. The guy at the bar leaning toward a girl who is leaning away with her knees pointed in another direction, doesn’t get the fact that she wants to escape even though she is smiling.

The guy “networking” who has a big fake grin on his mug, shoving business cards into the hands of the people he just met, is also another social nuisance who ignores the signs.

Nodding out of polite jest, the people he imposes himself on are screaming inside, but on the outside, you can see their feet pointing to where they would like to go, far away from that conversation.

If you ignore body language, you will most likely miss out on tons of opportunities with potential romances, or careers. When I was dating, I could always read what my date was thinking, regardless of her words. Sometimes nice words and polite gestures were made, but I could see it was going nowhere and she would rather be somewhere else.

On other occasions, they would try a poker face to avoid showing interest, but a person’s true feelings will get leaked by the things he or she is not aware of. When we know these signals, we can behave accordingly.

The same is true in the business world. If you want to be better at sales, learn what people are telling you with their bodies. If their language is negative, change it and you will change their feelings toward you, and the potential sale.

“I thought everything was going well, but now she says she’s busy every time I text her.” Yep, that’s from another guy who couldn’t read what his date actually thought.

She was polite and nice, and the conversation may have gone well, but without attraction, it wasn’t going anywhere. She likely showed you exactly that in her body language, but that is something you will learn when you start to tune in more intently.

To get a handle on this foreign language, you will have to learn to read gestures in clusters, and not on their own.

It’s usually a combination of signals that tells the tale, which is why so many people get it wrong.

If it’s cold out and somebody has his or her arms crossed, it doesn’t mean he or she is being closed off; the person is cold.

However, the feelings that gesture will create will be more closed and introverted.

The eyes will usually look to where they want to go. If you notice somebody keeps looking away, there is a good chance he or she wants to escape the conversation. This person might also have a lack of confidence.

If someone is comfortable, he or she will naturally be okay with standing or sitting closer to you, depending on your relationship.

Once while talking to two women at a café, the one seated right beside me was being very conversational, but she leaned back against the wall behind her because she wasn’t comfortable with how close we were seated, directly face-to-face.

In kind, I leaned back to mirror her body language and create space.

Her friend, on the other hand, was very comfortable with me, and was leaning forward in my direction the entire time. She was even reaching over and touching me on the arm and shoulder a number of times. The body doesn’t lie, even if the lips may attempt to conceal a person’s true feelings.

Anything crossing your chest can be considered closed, and very often is a demonstration of insecurity. People will often cover their crotch, put their hands in their pockets or turn at an angle when talking to others because of insecurity.

The exception being when a man is talking to another man standing square on, which can sometimes be considered confrontational. People putting their hands or fingers over their lips are often holding back from saying something on their minds.

This is basically the opposite of the above description. Open palm gestures, arms by your sides or extended outwards away from the body demonstrates confidence and acceptance toward whomever you’re talking.

7. But, I Just Feel Comfortable

People will rationalize why they have closed or insecure body language as being “comfortable.” The truth is, it is comfortable, but only because they are expressing their insecurity and most likely do it habitually.

Habit is comfortable, even when it’s bad for you.

Photo Courtesy: We Heart It