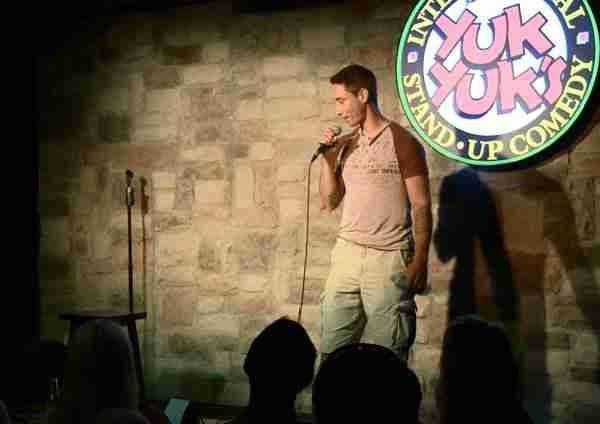 Why Stand up Comedians Are Tougher Than You (Personal Growth Challenge)

I’ve always been fascinated by stand-up comedians. There’s so many skills which require years of dedication to perfect, such as timing, delivery, body language, and the jokes themselves.

Doing stand up doesn’t have to be just for comedians though, it’s a great personal challenge for self improvement.

Here’s one reason why: The most impressive aspect of a stand-up comedians is not their technical prowess, it’s their resilience against criticism and haters. The ability to handle negative feedback applies to anyone who wants to be stronger in life.

The best comedians can take a hostile room and make mincemeat out of the crowd, eventually winning everybody over. That’s a skill in itself which can help us get more friends, dates and relationships.

Also see: Why self help junkies fail to create success

I listened to an old Bill Burr clip where he verbally beats up a room full of haters who were giving all of the comedians a hard time. Bill wasn’t interested in their antics and fought back.

Let’s talk about heart disease, something you’re all going to die of. –Bill Burr, addressing a hostile Philadelphia audience.

It takes some real balls to handle a large room of people who all hate you, fearlessly, and come out of the dark tunnel with all of them loving you.

Burr was hurling pure insults and the crowd still ended up loving him. Why? Because people respect courage and confidence. This applies to dating too, guys. If you don’t crumble at the first sign of negativity it can mean the difference between an amazing date or going home alone.

This is the grit you need in the long run to build any skill, as well as those little moments under pressure where you could call it quits, or stick it out and make something of it.

My first experience doing stand up made me stronger.

I bombed many times, you’re never above bombing. In 1993, I had been doing stand-up for four years. I was on a real high from doing really well in the amateur circuit. I was like, ‘Oh my god, I am so good!’ You think you are invincible until someone catches you on the chin, and your knees buckle and the room is spinning – that’s what happened that day. I got booed off stage. I remember the feeling clearly. My mouth went dry … It was like a dream sequence, where you cover your ears and hear things. –Russell Peters

The Importance of Personal Development

Comedians test & build their nerves every time they go on stage. The ones who make it are the ones who continue in spite of numerous failures, hecklers, and bad nights, only to come back and pull it off.

Nobody starts anything being good, let alone an expert, yet most people are worried about looking bad if something new doesn’t work out.

The guy who avoids putting himself out there will never become the kind of man that women desire and men respect. His own fear will limit the growth of his character.

Comedians don’t have the option of letting someone else do it for them. This is why they become so charismatic and resilient. It’s the work that they do, the grind, which makes them who they are.

My own experience with stand-up comedy tested my nerves in a way which I didn’t expect. Even though I had done plenty of public speaking and have met countless women in public, getting up on stage made me want to drink.

These pre-show jitters were intense, so I asked to go up first so I wouldn’t have to sit there boiling in my own nerves.

I sat there clutching a double gin & tonic, then my name was announced and my mind went blank. I walked through the packed crowd to the well-lit stage….

I had written notes on my water bottle in case I was so nervous that I would forget my jokes, but I didn’t need them. As soon as I was on stage my focus became razor sharp and all the jokes came out as I had rehearsed them. Some jokes bombed, but others got big laughs.

There was a woman sitting stage-side who had a scowl on her face. I could see that she hated my very existence. It didn’t even phase me though because I was in the zone. Getting on stage got rid of my nerves and put me into action mode. In many areas of life, thinking about something is often more painful than doing it.

Trying stand-up was one of the greatest experiences of my life, but it wouldn’t have been possible if I wasn’t willing to bomb and face my nerves.

Rehearsing tediously made the difference between a terrible experience and a great one. If you want to shine in any area of your life you need to prepare and then apply what you’ve practiced. The only thing you need to avoid is using the excuse of not being ready to avoid taking action.

When doing something new, we’re never fully ready, but action changes the equation because now we have experience.

The formula for personal growth skill building is this:

Then you can look at the result you got and make it better.

Repeat this process of practice and refinement and you will gain competence in anything.

When starting something new don’t expect perfect results, only expect a result. With that result you can plot your next course of action. Those who avoid taking action because they want a guaranteed positive result are doomed to be exactly in the same place 10 years from now.

If you want something bigger in your life then be willing to fall, look stupid, and get rejected to make it happen.

Stand up comedy gave me these basic lessons:

If you have a goal which terrifies you, try tackling that fear by doing what all stand-up comics do and face it head on.

Check Out: Darren DJ Fuji: Treat your life like a business to attract more women, money, and success

Want More Confidence so You Can Reach Bigger Goals?

Get confident in your love life, business, career, health, fitness and with friends.

I want to know more!