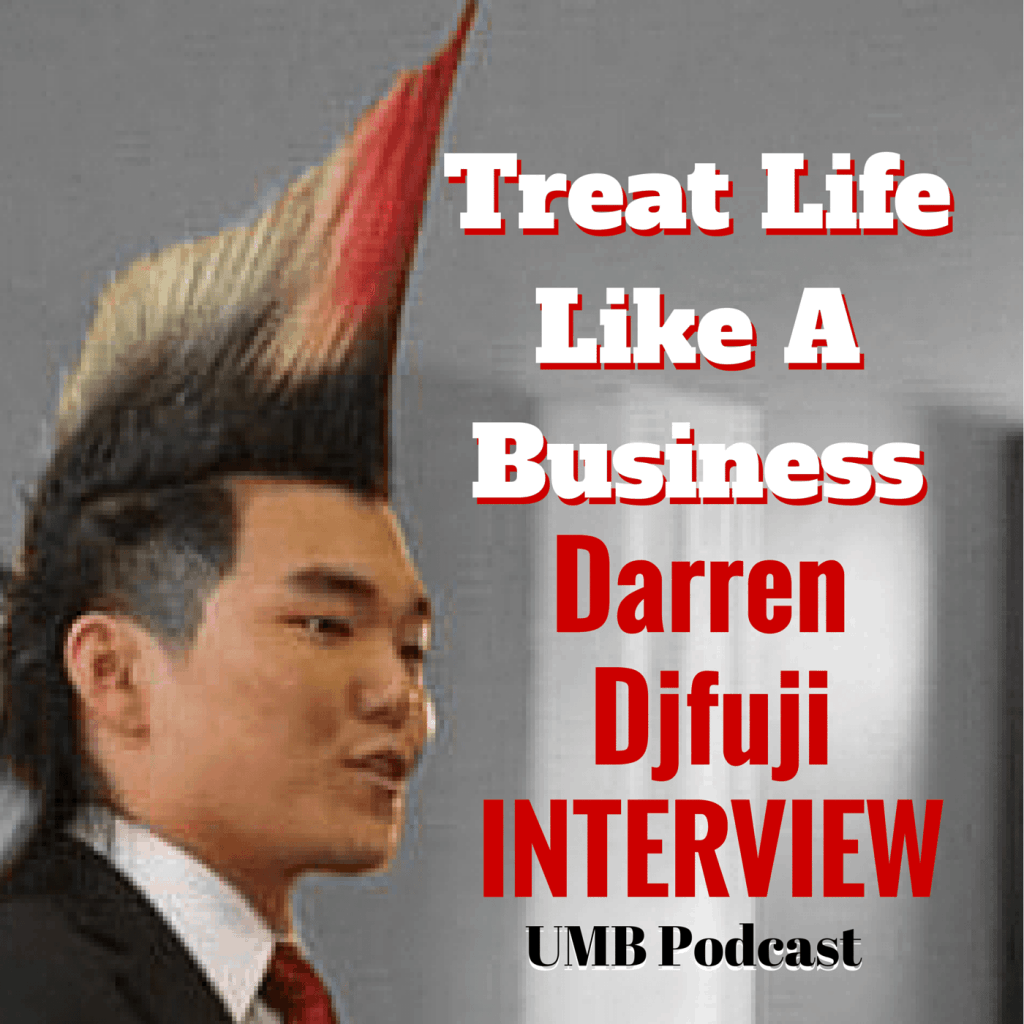 Darren Djfuji: Treat Your Life Like A Business to Attract More Women, Money, and Success

They didn’t teach me the concept so much as they did the concept. I remember when I was growing up and I was struggling in certain school subjects. Ironically, one of the subjects was math and, you would think all Asians would be good at math… but, apparently, they’re not!

[2:46] My parents sent me to this private tutoring service in the United States. It’s called Kumon. It’s this Japanese tutoring service and they do the same thing as in Japan: they drill you for hours after hours, after school.

[3:01] It was really expensive at the time, I remember thinking; and my parents had had to discuss it because they’d had me enrolled in the math one, the Japanese one and a bunch of other stuff. I was enrolled in lessons; I took gymnastics, I took martial arts… I took all kinds of things so I’ve had all this exposure to these different types of coaches and teachers.

[3:26] I remember my parents talking about how they could barely afford this. My dad had his own business and said how important it was not to skip on my overall education and skill development beyond school. He didn’t say it like that, but basically, he’d say if he had to work longer and not go out to the movies so that he could take another class, then it was worth it to him.

So they didn’t explain the concept to me, but that’s what I did. And, later, when it came time to date, I kind of did the same thing. I looked for help; I looked for guys from whom I could learn, I looked for tutors and mentors, and I took boot camps and courses.

And then, when it came to my hobbies, I did the same thing. I like photography (like a lot of people do today) and, when I did it, I said, “Hey, I don’t really know what I’m doing.” I tried it myself a little bit, then I did what I’d been trained to do: I hired a coach, a 1:1 coach. It was expensive–a few thousand), but I had him basically tutor and mentor me 1:1. He was a pro photographer and I remember thinking at the time that this was quite expensive.

Then we went out on my first shoot and I recall thinking, “Wow! I’ve learned more from him in one lesson than I have over the past two years trying to figure this out myself.” Looking back and realizing how foolish it was that I’d kind of screwed around, doing it myself, especially looking back and realizing how I wasted a lot of time when I could’ve gone on that camera and had that skill set, when that’s exactly how I was raised. That’s what I was kind of raised to do: to invest in myself.

Thinking about it later, I realized that the idea of business capital comes from an investment idea. If your return on investment (ROI) generally tends to be pretty big on that idea (especially if you don’t have employees there for about 40 or 50 years, or even understanding that people are going to change jobs), investing in the skill set of human capital and that of your people will generally be a very big pay-off for you and the organization.

[5:49] Of course, if you’re investing in yourself and treating your life as the organization, now your pay off’s huge. Now, if I were to learn Spanish (which isn’t one of my primary goals), learning a skill set like that now in my 30s, conceivably if I live to my 80s, I have 50 years’ pay off.

[6:21] Maybe I don’t learn it or use it every day. That’s still fifty years pay off. What other thing can you put money in that’s going to reap benefits for the next 50 years?

There are very few benefits that will appreciate over 50 years. Even those that do naturally, like if you bought gold bullion, that’s generally going to appreciate over the decades. But it’s still not going to bring you benefits over the years, right? It’s still going to go down, right?

[6:58] Most of the things we buy depreciate. That’s when I realized I wanted to invest as much of my time, money or energy or whatever into things that are going to have the biggest pay off. And that’s kind of when I came to this idea.

Eddy: So, you’re saying, basically, that instead of wasting your time (or potentially wasting your time) doing something completely on your own, you’d rather put the money into an idea or a program that’s going to help you get past that learning curve?

Do you feel as though a lot of people who start new ventures–like maybe they choose a skill like a language or start going to the gym to get buff or lose weight–or, even for dating coaching–do you feel like a lot more people would stick to it if they thought investing in an actual program where someone guides them and makes something out of them faster than just kind of wandering through the dark (basically) and eventually quitting?

(Interested in coaching to skyrocket your skills with women? Click here.)
Darren: [8:03] I think accountability is a big thing, especially if it’s something that’s difficult or has a high failure rate. Think about it: Why does law school exist? Why does college exist? You could do both on your own. There are reports of guys who’ve passed the bar and become lawyers without ever having gone to law school. Now, it’s really rare to self educate and not go through the education system. There’s no accountability. Think about it: law school and the educational system is simply about accountability. You could do the same work and take the same exams; it’s just that you won’t do it, so you have to have a teacher there who says, “Now do this exercise.”

[8:54] So I think accountability’s a big thing for making sure that you do it, but I think, in the bigger picture (and the way I wrote that post) is that I try to run my life like I run my business or just an organization or like I would run a military unit (or whatever) as a whole–because organizations are designed to be self sufficient; they’re designed to maximize growth, they’re designed with specific goals in mind.

[9:36] At the beginning of the year–the fiscal year–what do organizations do? They set up a fiscal budget, right?

When I was in the military, we had to set up a training budget. We allocated a certain amount for courses (sometimes even civilian courses, right?) and budgeted for instructors.

When I was in Marine Corps Bravo, the guy I’m taking the next course from was teaching the military edge weapons and stuff (like fighting with knives and all these different kinds of things).

At the beginning of the year, military groups and organizations will have a budget for what they’re going to spend–on guys like Bravo or supplies, etc.

Darren: [12:02] I think it’s the same thing as if you had a business and you ran it like that. The big consequence is: you tend not to meet your goals. As you said, you’re a leaf in the wind; you’re kind of a jellyfish. If a jellyfish wants to go from the east coast of Canada to Australia… Good luck, right? You’d better hope the water’s going in your direction!

Because there are no sails being set, no control and no actions in place, you’d just be relying on the “luck of the draw”. You’d be allowing your environment to push you in that direction.

[12:36] Say it’s financial. If you don’t have–presumably you have some sort of financial goal, you’re just praying to God that something finds a way to get there. I think that’s what most people are doing day to day and year to year, yet they expect to get some sort of windfall or financial success.

Everybody wants to be successful, financially, but, actually, less than one percent of the population is doing anything about it. Or doing the right things–like setting goals and taking the right actions to make it happen.

I think that’s why they get or have the financial inequality we have today. Especially in the United States, you see that people would rather complain about the inequality: yes, there’s inequality; yes, there are certain things that need to be addressed, politically. But people are more concerned with complaining about it than going about changing it.

I’ll bet, that if you polled the people in the occupy movement, you’d get, “Oh, these people are the one percent and we’re the 99%” stuff.

If you polled them and asked what things they were doing to get out of the 99%… asked them if they had a budget for this year or if they were investing in themselves so they could get closer to the one percent next year… dude, if you want to be in that one percent, are you doing anything about it?

Eddy: Yes; I think it would be more productive for people to get their minds together and work toward achieving business goals and stop making $30K a year (or whatever the income is).

Just thinking about bills, I see where you’re at, too, talking about the occupy movement. I hear from past friends who would rather complain about the price of tomatoes, rather than earning more money so they can pay for them. When people say things are too expensive I say you just need to make more money.

One book that had a major influence on me years ago was, Rich Dad, Poor Dad: What the Rich Teach their Kids about Money that the Poor and Middle Class do Not! by Robert Kiyosaki.

(I’ve heard recently that maybe the story wasn’t real.) But the same principles holds true: you have to invest in yourself. There’s no such thing as “too expensive”, really. Obviously, if you want to buy a penthouse in New York, that’s really fucking expensive unless you’re a billionaire. It’s relative to where you are in your own life.

If food is too expensive in your city–and, we’re talking about a basic necessity here–that just means you’re not making enough money, in my own opinion.
JT Tran Interview: The Asian Man's Guide to Meeting and Dating Beautiful Women »