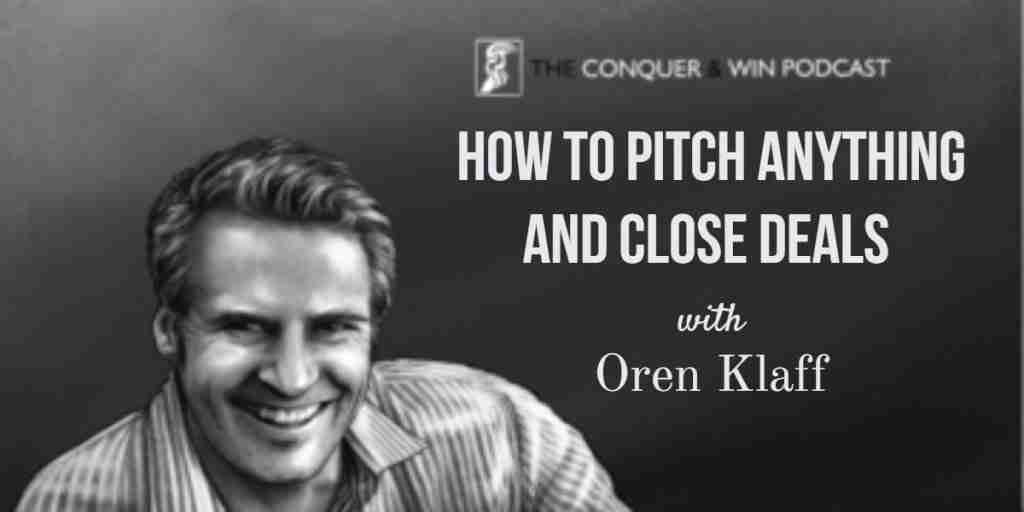 Oren Klaff, author of Pitch Anything, knows the difference between a bad pitch which kills the sale, and one which closes the deal.

When you're on stage, in front of a client, or even trying to negotiate a better deal on a purchase, your pitch is the difference between winning and losing.

If you want to:

Then watch Oren Klaff here on YouTube, or keep reading below.

Some key mindsets when negotiating are:

Frames are mental constructs - it's the box that contains a point of view or the embodiment of a belief system. The box holds concepts about yourself that you believe are entirely true and should happen.

So if you’re convinced that you’re absolutely right - you have the influential upper hand right from the start, if you can beat the other guys frame.

A child’s frame is based on what they wholeheartedly believe.

If they want ice-cream before dinner, they believe:

However, the parent’s frame is based on:

The child’s resolve in presenting their side of the argument is with complete conviction - this is the way things should be - and with total focus on overcoming the parent’s opposing frame.

So we're locked in conflict, and it's the strongest frame that will win.

This principle of the strongest frame winning out applies to business and the psychology behind developing convincing rhetoric.

So, it’s about making a frame that’s emotionally appealing as well as logical.

When you’re dating, there’s no situation where a logical argument is going to get you a date. It’s not a compelling argument. In business, someone’s going to want to work with you when they’re emotionally exciting about the idea of working with you.

If your frame - when you walk into a pitching situation - is unbreakable, it will absorb the potential negativity of the person who tries to catch you out with trick questions, attempting to derail you.

Oren has quite the pattern. On opening a negotiation, rather than humbly thanking everyone for their time, he hits them with a different approach:

To know good, you have to understand evil. What most people do is say:

Thank you so much for taking this meeting with me and for the opportunity to come here.

Please/thank you: it's not in the dictionary anymore.

The way we start is:

Hey, guys. It's eleven o'clock. That's the time we agreed to start. Let's light the fire and kick the tires. Does anybody need fluids in or out? If not: let's roll.

This upsets the balance of power in the room, demonstrating that you value your time - so should they.

Developing the strongest frame helps you absorb the counter-argument from the other person’s frame.

Here are some more tips on how to win any negotiation.

You Can't Argue With "It's the Right Thing to Do."

This is all about walking into a room with utter conviction that your idea is right - it's strong, unshakeable, and more morally correct.

When your frame absolutely cannot be broken, you are in control of the frame and you can get what you want.

It overtakes the want of the other person.

What if Both Frames Are as Strong as Each Other?

In a negotiation, you’ll sometimes find that the counter-argument has a frame that’s equal in strength to your own. This is the point at which you need to stack your frame - introducing another level of conviction that is going to overcome the determination of the other negotiator.

The stronger frame is the morally stronger - because no-one can argue against what is morally correct.

Frame-stacking is where you introduce an additional level of conviction - a new strategy. This is needed where frames are locked in combat because they are equally strong.

Conflict is two clashing objectives - Person A wants something, but Person B wants the same thing or just to stop Person A from getting what they want.

At the heart of it - regardless of what the scene is really about - the underlying drive of action springs out of conflict.

As an audience, we usually root for the good guy because what they want is right (their frame is morally stronger and, therefore, must win out).

The bad guy wants to overcome the good guy’s aim.

But for the story to progress, one of them must win. And, of course, we want the good guy to win because their frame is morally stronger.

To win, the good guy must have an arsenal of strategies to fire back whenever the bad guy comes up with obstacles.

Equally, the bad guy has to have lots of strategies of their own; otherwise we get a boring drama.

But, ultimately, the good guy must win.

So every time the bad guy tries to defeat the good guy's reserve, the good guy has to come back with a stronger argument (frame stacking).

Even if they don’t win the first time around, they win in the end. (Apart from Hamlet - *spoiler alert*. That ends with everyone dead. But let’s not go there).

And this is how Oren Klaff’s Pitch Anything frame control concept relates to relationships.

The Pitch Anything Approach to Relationships

A relationship is an ongoing sequence of negotiations, and for it to work, an understanding of frame control can really help.

Part of what makes a frame strong in the Pitch Anything world is that the message has to be:

And once you’ve made your mark, you pull back at the end to avoid appearing too needy.

Let them come to you.

How the Brain Works According to Pitch Anything

Klaff explains that the human brain has evolved in three principal ways to adapt to different situations:

When you explain a concept or idea (pitching), you're using your Neo-Cortex.

But, in pitching, the audience (your partner) is using their Crocodile brain to differentiate between the great ideas and the not-so-great ones.

If you bombard with too many ideas that don't feel like a priority, requiring too many brain cells to process, the Crocodile brain banishes it to the Spam folder.

Breaking through the Crocodile brain means that you need to keeping the message simple, emotional, and elevated.  And this is how it relates to relationships.

The idea of a chocolate cake hijacks your logical responses. In nature, there would never be a single thing that concentrates so much energy [calories] into something so small. We’re genetically programmed to take that energy when offered. Our survival instincts are fuelled by that extra energy. It hijacks your normal operating system.

We're attracted to energy. It's about making the opener as sweet as possible, maximizing the impact of your side of the argument.

Of course, relationships are a negotiation of compromise - and compromise is an important tactic to play - it's the frame stack.

Compromise doesn't mean you've lost or have been defeated.

If we go back to the drama analogy, compromise is a strategy in getting what you want.

We hope you enjoy listening to Oren's fascinating insight into influence, persuasion, and winning.

To find out more about Oren Klaff and Pitch Anything, go to Oren’s website -pitchanything.com.

For a simple summary of the Pitch Anything philosophy, try out this great YouTube video.

But don't forget to listen to this week's Conquer and Win podcast, featuring Pitch Anything author, Oren Klaff.