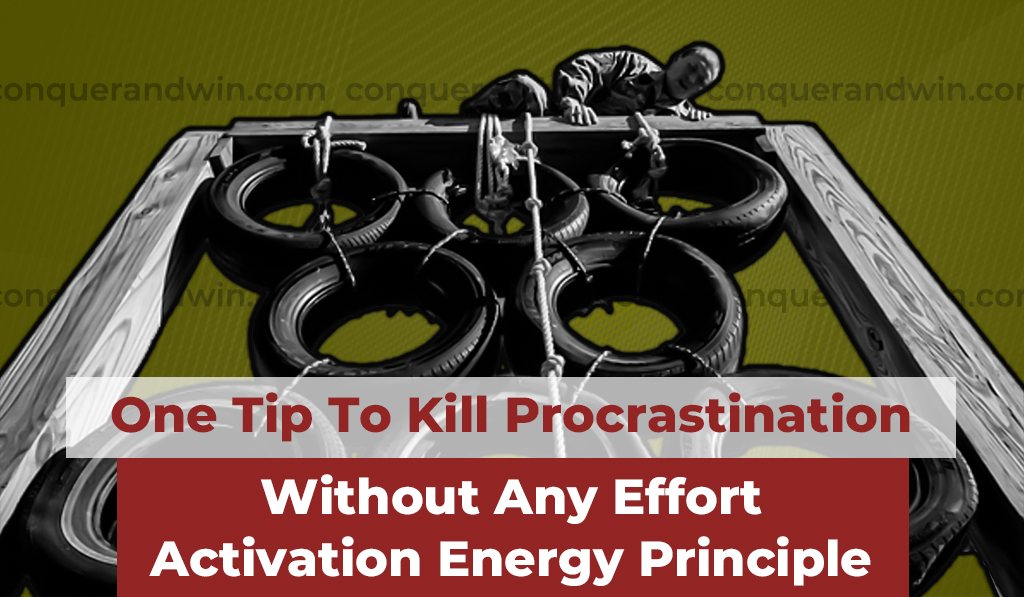 One Tip To Kill Procrastination Without Any Effort Activation Energy Principle

This is an EASY tip to implement right now, not tomorrow. I mean NOW.

This principle will help you:

There are TONS of potential obstacles to getting work done and achieving your goals, but with this one tip you will eliminate some of the most insidious obstacles which you don’t even know are stopping you. As much as that sounds like clickbait this is for real. So what is it?

A concept called activation energy was espoused in the book, The Happiness Advantage: The Seven Principles of Positive Psychology That Fuel Success and Performance at Work.

What it is in a nutshell: the elimination of any minor obstacles which require you to take any unnecessary time to get a task done. The result: JOB DONE, and much more easily than if you had to use your willpower alone, in fact, this will eliminate the unnecessary use of willpower.

Here’s an example from the book:

the key to daily practice is to put your desired actions as close to the path of least resistance as humanly possible. Identify the activation energy—the time, the choices, the mental and physical effort they require—and then reduce it. If you can cut the activation energy for those habits that lead to success, even by as little as 20 seconds at a time, it won’t be long before you start reaping their benefits.

He goes over a great example about how he wanted to play his guitar, but the extra 20 seconds it took him to get off the couch, go to the closet (in the same room), open it and get his guitar out, was actually stopping him from playing. He didn’t have to get in his car and drive somewhere to play, it was a measly TWENTY SECONDS  which was derailing his guitar playing ambitions.

I like to refer to this as the 20-Second Rule, because lowering the barrier to change by just 20 seconds was all it took to help me form a new life habit. In truth, it often takes more than 20 seconds to make a difference-and sometimes it can take much less-but the strategy itself is universally applicable: Lower the activation energy for habits you want to adopt, and raise it for habits you want to avoid. The more we can lower or even eliminate the activation energy for our desired actions, the more we enhance our ability to jump-start positive change.

Getting rid of the tiny barriers that stop us can be an immense aid in your success. If you want to read a book which is conveniently tucked away in a shelf nowhere near the couch where you sit to relax in the evening, then put it on top of the coffee table by your couch, or even on the couch itself.

Or if you want to run, have your shoes and running clothes ready, RIGHT BESIDE YOUR BED. Not in the closet, not in your dresser, but right beside your bed so you wake up and put them on right away so you’re ready to go.

Activation energy can be used in your favor in the case of eliminating bad habits. Spending too much time on social media? Delete the apps on your phone, and log off on your computer so that every time you feel compelled to check, you have to re-enter the email and pass code to get in. That little bit of hassle can be enough to deter you from wasting your time.

To get rid of bad habits make them inconvenient.

We’re naturally lazy, and knowing this fact it can be used in your favor to break bad habits, or to create new good habits by making an activity easier to get into.

Have a story how activation energy worked in your favor or a situation you eliminated it? Leave a comment below.

How To Get A Girls Phone Number »