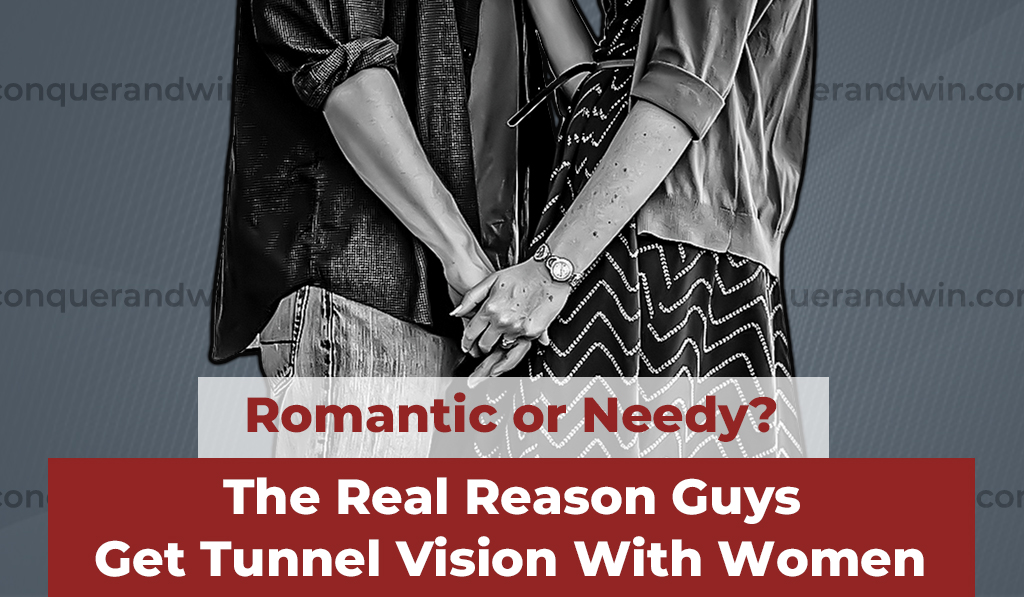 Romantic or Needy? The Real Reason Guys Get Tunnel Vision With Women

I got a msg from a friend the other night, he tells me, "I've got a crush on a girl I met at a work event."

"I didn't get a chance to ask her out but I added her on Facebook. I'm not sure if I should ask her out when I see her at the next work event or msg her on online."

I responded "OK...maybe you should focus on meeting more women instead of plotting how you're going to ask out this one woman."

This is not the first time my friend has been in this exact situation. He meets someone through work (a bad place to meet women), doesn't get the nerve to ask her out, or as he puts it "Didn't get the right opportunity to ask her out", then adds her on social media later. After all of that he waste mental energy and time plotting on how he's going to ask her out.

Don't get me wrong though; he often does well but this particular situation seems to come up fairly frequently, and he's not alone.

Does this happen to you?

Just like my friend, a lot of guys are stuck focusing on one girl and they spend a huge amount of time plotting a plan of attack, and waiting for the perfect time to ask out one woman. They don't realize that their infatuation is fueled by neediness and a lack of options.

Usually the object of desire isn't even the kind of person the obsessed guy thinks she is neither, she's just an avatar that was created in his mind. (Avatar = Character or representation)

Why? Because he doesn't know anything about her; he just filled in the blanks and is imagining a woman who is probably a lot different than the real person.

If you want to get a girlfriend start moving your attention away from a single girl whom you're crushing on, and go out learn how to talk to women in general. If you do this you will develop the courage to ask anyone out, and being confined to only asking out women who were introduced to you will become a thing of the past.

You can even ask out the woman you're obsessing over right now, but make it happen or leave it be, and be happy with the fact that you took action. Her decision to go out with you or not is irrelevant.

Get good with women by meeting them and leave the tunnel vision behind. One girl is not going to make or break your love life, but focusing obsessively on a single girl will certainly drain you emotionally instead of energizing you. Dating should be fun, not serious and precise like a moon landing.

The irony here is that the one woman you're focusing on will probably be repelled by your singular pursuit. If you're meeting women, plural, you will become more attractive to the one and the many.

So where does the passion and romance fit into this story? Well the movie depiction of the guy who follows a girl around (stalking her), doesn't say anything, and then somehow manages to make her fall in love with him is an illusion. Nobody wants somebody who is obsessed or acts like a stalker, but Hollywood likes portraying this needy behavior as being romantic.

It's not romantic or cute, it's obsession. It's also a challenge that many nice guys face. True romance comes when you've found someone you really connect with and can take on an adventure; true romance starts right from the time you approached her and took her away from her everyday routine.

So don't be confused by the "romantic" notions presented in the movies. An obsession with a coworker or friend is not healthy or cute.

Create romantic moments by daring to try, putting yourself out there, and focusing on creating a life that someone else would like to be a part of.

If you're tired of trying to figure out dating and relationships it might be time to try something new. You don't have to do it by yourself.

Feminism Vs. Egalitarianism: How Can We Cultivate a Safer Society? »