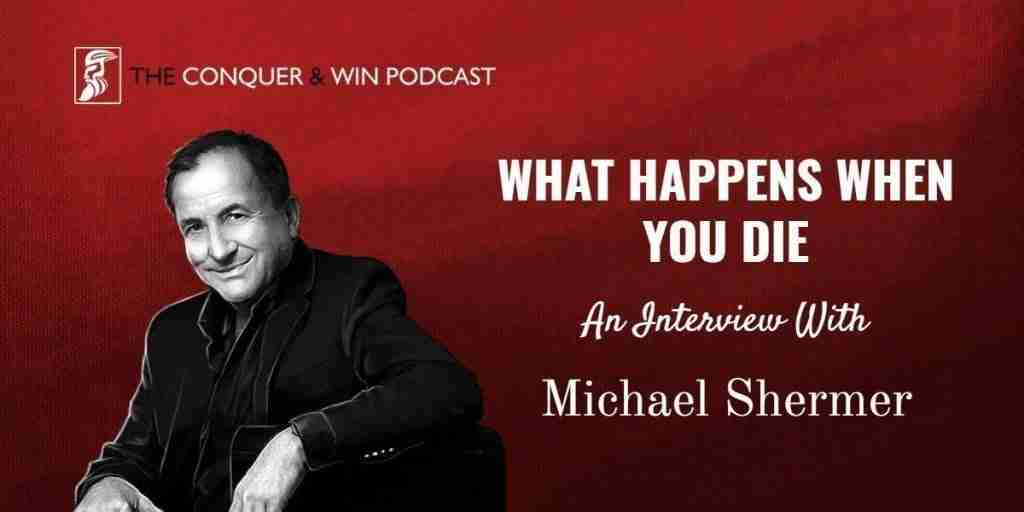 What Happens When You Die: An Interview with Michael Shermer

What happens when you die?

That’s the question that caused Michael Shermer to write his book Heavens on Earth:The Scientific Search for the Afterlife, Immortality, and Utopia.

​A debunker of pseudoscientific thinking, he tackles the problems with religious and scientific immortality.

Michael Shermer joins Conquer and Win for an interview to discuss his new book, Heavens on Earth:The Scientific Search for the Afterlife, Immortality, and Utopia, to answer those questions.

Also read: How To Make Fast Decisions And Become Powerful or How to Master Your Mindset For Success

Schermer’s book, Heavens on Earth, he works to discover why people focus on the afterlife, especially the scientific attempts to reach immortality or to create a political utopia on earth.

While religious people describe various forms of eternal life, a new group of engineers and scientists are working on ways to extend life or even reach immortality.

What Happens When You Die?

What happens when you die? According to Shermer, there’s nothing.

“People have pictured themselves dead. They have a conscious image in their mind. There’s my body in the casket, and my friends and family and loved ones are there, hopefully mourning. But you wouldn’t see anything, experience anything...There’s just nothing.”

That’s impossible for us to imagine, because we can’t even think about having no existence. Our minds and language can’t process it.

Shermer says, “Even words like ‘nowhere’ and ‘nothing’ there’s a where that there is a no of. There’s a thing that doesn’t exist.

It’s not even that.

It’s almost like trying to imagine there is no universe. Just picture the universe, no stars, no galaxies.

Listen to the full interview here (or continue reading below):

Scary. No wonder people want to crack the code of immortality.

There are many scientific attempts to achieve immortality. Shermer talks about two ideas:

But Shermer says that these aren’t paths to immortality. They’re dreams.

Many people think about immortality as an engineering problem. If we can just crack the code that causes our cells to age, we can extend human life for decades, even centuries.

Ray Kurzweil, a futurist and AI expert, told Fast Company, “Our mortality is something that should be in our hands. It’s something I want in my hands. I believe we’ll demonstrate a mouse that doesn’t age within about a decade. And we’ll translate that into human therapies.”

But Shermer doesn’t believe it.

Is the Search Worth It?

Shermer says that the search for immortality might be worth it, though.

I like it a lot that people are trying to do this. Because, maybe along the way, they’ll stumble upon cures for cancer and alzheimers and senility and things like that...On the dark side of that, if people start living 150 - 200 years, would there be new medical conditions? Undoubtedly there would be.

Living Forever In A Computer

Others want to gain immortality through software. Can we upload someone’s mind into a computer so they can live forever in the machine?

It would just be a copy. It would just be your twin. In the moment that you are living a different life of any kind from the copy it’s no longer you. It’s just a copy. No twin looks at their sibling and says, ‘Look, there I go.

The moment your copy experiences something different from you, it becomes someone else. “If the copies think they’re you, so what? The copy doesn’t carry with it your point of view.”

The Self Is An Illusion

Our idea of the self as our brains, our minds, is an illusion.

Even the whole notion of self is pretty questionable. It’s something of an illusion. Our physical bodies are not the same bodies, material wise, as they were a decade ago. All the molecules are recycled. The moment you want to make a copy, the illusion starts to break down.

When we make a copy of our personality or our mind, we have to realize that the self isn’t really our individual parts.

Religious explanations for eternal life don’t escape Shermer’s criticism. There’s no scientifically verifiable record of an afterlife. No one has come back to tell us about it.

What about a physical afterlife, when God gives you a new body. Shermer says:

The Soul in Heaven?

Maybe the afterlife is a copy of your memories after death, your soul up in heaven. But that doesn’t work either. Your memories are just a snapshot of you, but they’re not you.

“The memories of, say, when I was 30 are quite different now that I’m in my 60’s than they were in my 30’s. In my 30’s I had memories of being 30 that are different than the memories i have now of what it was like when I was 30. Even the idea of copying your memories as yourself, that’s not you.”

The west has become enamoured with eastern philosophies. Shermer interviewed Deepak Chopra who talks about an individual as an extension of consciousness.

He describes the brain like a TV receiving a broadcast.

“But where’s it located? How do you know that the brain is just a way of tuning in to the conscious state that’s out there, like a television set? It’s an interesting analogy. But with television sets, we know there are broadcasting signals sent out that television sets pick up. Where is the equivalent of that for brains?”

Chopra might respond that it’s everywhere. It’s the ground of being. It’s the ontological primitive.

Why All This Skepticism?

There’s a reason why Shermer is a skeptic. He’s worried that the obsession with eternal life makes us miss this world.

“My concern about this obsession with the after life, either religiously or scientifically, is that you’re gonna miss this life… Since we don’t know, and what we do know for sure is that we have a here and now, make the most of it.”

Biology and The Self

Shermer also talks about how our biology, our bodies, influence how we act.

“We have to think of the self as a loose fuzzy parameter. Think of a giant sphere that’s constanting bending and flexing and moving. You do have a coarse set of temperament and personality characteristics.”

Our personality is a mix of our DNA and how we live.

“We know from behavior genetic studies that at least half or more of those [big five personality traits] are heritable... A lot of that is just hardwired in from brain chemistry and genes... It’s half, that gives you half to work with.”

Even though so much of our personality is hardwired, there are ways to work around it.

Knowing that these are the determining factors, or influencing factors, in my life, I can do workarounds… In terms of self-help and what you can do, there’s a lot. Even if it’s half genetics, there’s still a lot of environment left you can manipulate.

But we’ll never perfect ourselves, no matter how we try.

“If you’re aiming for perfection, that’s not going to work.”

There’s a reason Michael Shermer is the editor-in-chief of Skeptic, he doesn’t believe that we will ever achieve immortality or utopia.

Instead, Shermer wants us to focus on the here and now. Focus on doing what is good and praiseworthy.

Then he gives us a few tips about how to live that way, how to hack out biology:

But don't forget to listen to this week's Conquer and Win podcast, featuring an American science writer, historian of science, and the founder of The Skeptics Society, and author: Michael Shermer

Michael Shermer is the editor-in-chief of Skeptic, columnist on scientific American, debunker of pseudoscientific thinking, and long-time nemesis of Depok chopra.

You can find Michael Shermer’s books and learn more about his work on his website. www.michaelshermer.com

Jack Donovan: How to be a man (and why it matters) »