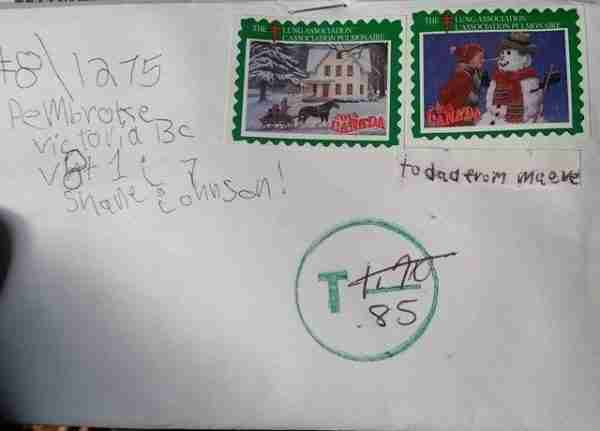 Sometimes the world seems cold and uncaring; most people only seem concerned with themselves and rarely ever get around to helping others. Often it seems like people will even take the opportunity to help someone and do the exact opposite, on purpose.

The small things are often the most meaningful, and the easiest way to make another persons day awesome.

Well one of these small but highly meaningful gestures was experienced recently by a friend of mine.

His daughter sent him an early Christmas letter, without stamps. You can see the lung associations Christmas seals on the letter which have no monetary value, and can't be used to send letters. It's also obvious that a little girl sent this letter, and someone at Canada Post with a big heart took notice, maybe a few people.

The letter made my friends day, and it was a simple gesture which nobody would of thought anything about if it had not happened. It's easy to follow the rules and just do 'what you're supposed to', but it takes a whole lot more to break the mold and do something special for someone.

The letter came with a request to pay for the stamp, on good faith. Sometimes trusting others and letting go is the best course of action.

We really have a ton of opportunities to help others with the small gestures that can often be the difference between a horrible day, and an awesome one, and it barely even takes any extra effort on our part.

What could you do for someone today? Write a letter thanking someone for something they did for you? Pay someones parking when it expires?

Paying it forward can be extremely rewarding, and you don't even have to have received a favor from someone in the first place. You can start a chain of kindness with a simple act starting today. Do it for a complete stranger with no expectation of ever getting something back; the good feeling you'll get will be an instant reward which will continue to cultivate your own compassion which will enrich your life, and the lives of people around you.

Here are 6 things you can do for a complete stranger to spread some Christmas cheer, and some joy for the other 11 months of the year. Remember, if you need a holiday to do something good for other people then you're doing it wrong.

They may be stuck in an appointment, or maybe they just lost track of time; either way you can save one lucky stranger from having to pay something that could go to better use, and might give them a bad day.

2. Let someone into your lane

I never understood the competitiveness of some people who don't allow others to enter their lane. One time while trying to pull away from the curb in heavy traffic, this guy decided to barge forward, trapping me in the same spot. The guy behind him was much kinder and let me in. Don't be a lane hog.

3. Pay for a random persons dinner

When you go up to pay for your own meal, choose a random stranger who is still dining and pay for theirs as well. Let the server know to pass a note saying to 'pay it forward'.

4. Leave a nice note for your server

One time at my favorite Japanese restaurant, instead of just leaving a tip, I decided I would write a note on the bill for my waitress. Her service was great and I wanted to let her know in a way that was more meaningful than simply leaving a few extra dollars. It's easy to feel undervalued at work, so next time you get great service at a restaurant or from any service personnel, leave a nice note expressing your gratitude (and don't forget the tip).

5. Give your seat to someone on the bus

There's probably nothing easier than giving up your seat to someone who could use it more than you. Sometimes that might be an elderly person, and sometimes it might just be somebody who looks tired and needs a break.

6. Break a rule to help someone

The workers at Canada Post could of just done business as usual and not have processed my friends daughters letter, but instead they decided to act with compassion. When you find yourself in a situation where you could help someone by bending the rules and making an exception, consider the impact your kind gesture could make.

All of these small gestures, as seemingly selfless as they can be, actually do a lot to build up oneself. The magic however lays in how they help other people at the same time.