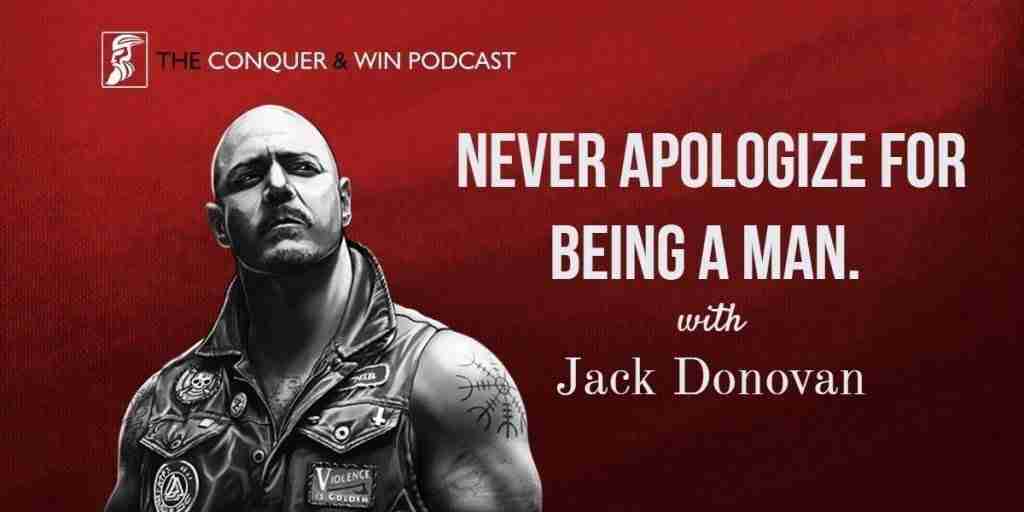 Jack Donovan: How to be a man (and why it matters)

"How to be a man" is a question I hear often, and Jack Donovan has some surprising answers.

As men we're all born with certain ingrained masculine qualities. It's at the very core of what makes us men.

These qualities help us live more powerful lives, strengthen our communities, and enhance our relationships.

By enhancing your masculine virtues, you can:

More importantly, it's why our ancestors survived and thrived.

In today's world, men are being asked to shun masculinity, and many of us have lost the way of men...

If you're a man reading this you may be confused about what it even means to be a man. If so, the masculine qualities I write about are probably a mystery to you.

In this podcast I hope to give some enlightenment on what it means to be a man with my guest, Jack Donovan.

Learn how to enhance your masculine strengths to build your confidence, physical & mental strength, bravery, assertiveness, and sexual attractiveness to women.

Best of all, reclaim your place in the world as the man you were meant to be. Never apologize for being a man.

Listen to the full episode here or keep reading below:

Listen on iTunes | Listen on Stitcher

Jack Donovan, author of The Way of Men, talks about the role of masculinity in the modern world.  He's jacked, tough, confident -- and couldn’t care less what you think about him going to yoga class with a bunch of leggings-clad women (I'll get to that later).

What is a man?

Although it’s pretty obvious how to identify a male from a female, masculinity itself is often clouded by vague notions and moral ideas.

When looked at objectively masculinity is amoral. It should never be conflated with the notion of being a good man or a good person.

The reason is simple; Masculinity is a direct result of our evolution. It's about survival and reproduction. It's how our ancestors "made it to the next round." It's not about being good or bad, but you can be good or bad and still be masculine.

“This is basic masculinity. It's not the be all-end all of everything, but if you don't have that - it's the piece of the puzzle you have to have. If you create a  definition of masculinity and don't include those 4 tactical virtues and this kind of evolutionary role that men have always had, then that's when you get into topics that are about being human and aren’t specific to being a man.”

Physical strength, honor, and the courage to defend your tribe don’t have a big place in today’s world. Although mastery is still highly sought since nobody benefits from sloppy workmanship.

It’s not like you need to physically fend off bears while trying to kill your dinner and protect your damsel from attacking forces. Today, many of the most successful men sit behind computer screens all day.  The (Western) world doesn’t need warriors the way it previously did.

So what's the value in enhancing masculine qualities?Well, a lot of it comes down to playing from a position of strength.

How can a man build confidence?

Masculinity has become a luxury, a virtue, but it’s important because it brings out the best version of you. As Jack says, it’s just “the best fu**ing way to be.”

We all do best when using our strengths instead of trying to play from a position of weakness.

A man with an elongated, narrow build will never beat a man with a shorter, stouter build at power lifting. The physical mechanics just aren't there.

The same could be said of the stouter man trying to outdo the tall lanky guy at a marathon. They both have natural talents, and not using those talents means playing with a disadvantage.

That doesn't mean the lanky guy shouldn't lift or the stout man shouldn't run though. It's just important to know where our strengths lay when trying to excel in any area of life.

By the same token, trying to be more feminine doesn't make men better. It's a losing game with diminishing returns which takes away from our natural strengths.

We have emotional and feminine qualities too but they're expressed differently. They shouldn't be focused on to the exclusion of what we do best; being men.

So how can you enhance your confidence as a man?

According to Jack, the key is to seek out the masculine experience by challenging yourself.

These kinds of activities build strength and confidence.

Find a place to challenge yourself physically, especially in a group. This will help you connect with other men.

How does a confident man act?

Confident men keep their heads up, never walk around looking at the ground, and make solid eye contact with everyone they meet (along with a smile, when appropriate).

If you want to be a more confident man then:

Another factor causing the dwindling masculinity is isolation. We no longer live in tribes -- men essentially go back and forth between their cubicle and their home.

I've worked with many men who've lost their masculine edge, and as a result don't know how to attract women. They have no male role models, often were raised by single mothers, or had a bad role model from a passive father.

Many men end up learning about being men from horrible sources such as Hollywood, the news, or women. It's not a jab at women, but female role models can never embody the essence of masculinity.

Instead of focusing on being men, too many guys focus on what women want, and seek approval. Ironically, this approval seeking ends up turning women off. That leaves guys going in circles wondering why they can't attract women, then trying harder to get approval...

It's the definition of a "nice guy", which is a man without the courage to own his space.

So, what can you do to create connections with other guys? Jack put it well here:

You have a lot of these guys in "The Game" trying to figure out strategies to meet women -- well you have to do the same for hanging out with men.

To make guy friends go where guys go. It’s just like trying to meet women. Find places where guys hang out and start going there.

Jack gives another reason why connections with other men are so important:

“There's an essay in ​Becoming a Barbarian, my book, where I really hammer on dudes who want to be individualists -- their idea of masculinity comes from a Clint Eastwood film, where they are walking alone and they can't really relate to anyone because ‘I’m too deep and into my own thing and I can’t have any friends because i just hurt people’…. It's this weird Hollywood BS - if you're going to be a happy guy, enjoy your life and be the best version of yourself, you need (male) friends.“

No man is an island.

The latest explosion of sexual harassment allegations in Hollywood demonstrates how easy it is to ruin a man's career and reputation. Forget evidence and due process, a Tweet is enough to get fired. It can even be anonymous.

What Jack finds most disgusting is when women claim that some guy said something "inappropriate" to them years or decades ago. God forbid, he may have even asked her home.

That’s not sexual harassment -- the guy was hitting on them, and they weren’t interested. That should be the end of the story.

The most unfair part of this framework is that women use sex to their advantage all the time. Women constantly get jobs and promotions based on their looks.  But if men act like men, all hell breaks loose and society demands that they apologize. Everyone knows that guys want sex -- this is normal.  But people live in a dream world where women can essentially do whatever they want but men are forced to apologize if they even look at a woman wrong.

Obviously rape or any unwanted sexual experience is wrong, but that's not what we're talking about. Men shouldn’t apologize for showing interest in women. That's how relationships start.

Women are responsive to sexually assertive men. It doesn't always work, but try being passive and see how much of a sex life you'll have. That's a lose-lose for men and women. Nobody gets what they want if everyone is to afraid to 'make a move'.

That leaves us with more men running around asking, "What do women want?" and making futile efforts to appease and please. In the process, they lose themselves and even the approval they desperately seek.

For other men, avoidance becomes the norm. Neither option is palatable.

So what should you do if you're a man who's falsely accused? Hold your ground.

The second a man apologizes, his entire life becomes about the apology. Women will never accept it, and men will never respect it, so you lose.

...now they actually have you on the run. So now, anything you ever do, they'll just bring it back up again. It never goes away. Someone calls you a racist, or a sexist, the first time you apologize, you are now apologizing forever. If you start doing that you're going to fail.

If you're constantly having to defend yourself it's unlikely you'll regain a foothold. Instead, define your position and hold your ground.

Don't bow down when people start flinging mud. Handle the challenge from a position of strength.

* Just to clarify, Conquer & Win does not condone actual sexual harassment. I won't make definitions here because we'd be looking at text about as big as a legal document.Kind of stupid to have to say that, but it's the world we live in.

A couple points to leave you with:

Did you like this podcast or article? Please leave a review on Stitcher by clicking the icon below. For iTunes click here.

Every review helps spread the word and grows this personal development community for men.