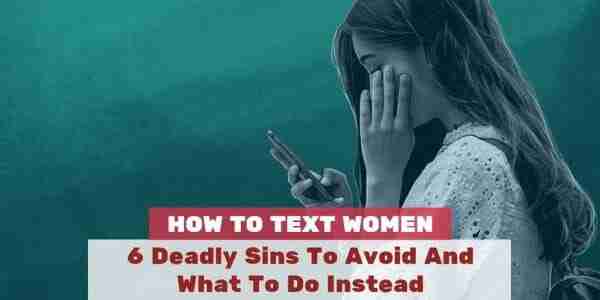 How To Text Women(6 Deadly Sins To Avoid)

We get it. Introducing yourself to an attractive woman isn’t easy. Even though online dating does relieve some of the pressure, it can still be hard to know what to say.

Also read: How To Tell If A Girl Likes You and How To Go From Friendzone To Relationship.

And that’s why so many men get the first message wrong.

If you’re one of the nearly 70% of guys who tank regularly on your first message, know this: you’re not alone.

The biggest reason guys fail to receive responses from the women they message is because of a simple lack of effort.

Tired of winging it and trying to figure out what to say?

Learn how you can confidently get the kind of love life you want (even if you're not confident).

Watch my free video by clicking the button:

Some of the most common first message faux pas guys make are outlined in this comprehensive infographic covering first messages courtesy of BeyondAges.com.

Take a look and see how you stack up compared to other guys and learn how you can do it better.

A whopping 23% of men make “hi” their first message.

If a woman is receiving a lot of messages—and attractive women always do—you need to get creative.

Saying “hi” or “how are you?” isn’t going to make you stand out from the 20 other messages she received that day.

So, what will make you stand out from the crowd?

Well, 31% of guys think complimenting a woman’s appearance is the answer. The problem is, sending a “you’re so hot” message really isn’t any more original than saying “hi.”

Attractive women get compliments like that all the time and, eventually, they start to lose their meaning.

The other thing to keep in mind is that while women do enjoy flattery, few want their initial interaction with you to be about how they look.

If you’re in doubt about the effectiveness of the message you plan to send, worry not. In this article we’ll cover the top blunders guys are making.

Being unrealistic — Expecting women to swoon over a simple “hey” is crazy.
Not making an effort — Being lazy has never won a lady’s heart. Putting in a bit of effort with your opening message can make all the difference.
Giving the wrong kind of compliments — Focusing on her appearance makes you appear shallow.
Being too general — Using the same line over and over again with multiple women is transparent. Savvy women will know what you’re up to.
Not being real — Women can spot a fake a mile off, so lying or exaggerating are never a good plan.
Making it sexual — No woman wants to be objectified by a guy she doesn’t even know.

If you’re ready to up your game, read on to not only learn more about the common mistakes men make, but how you can avoid them and score a lady’s attention.

A lot of guys think writing “hey” or “how’s it going?” are perfectly acceptable first messages.

But picture this: you’re waiting in line at a coffee shop. You spot a woman you find attractive and walk over to her and say “hi.” Then you just stand there, grinning like an idiot, hoping she’ll be dazzled by your awesomeness.

It’s not likely that is going to happen, is it?

She’d likely say an awkward “hi” and get away from you as quickly as possible.

Here’s another scenario. You see a gorgeous woman while walking your dog at the park. You approach her and say, “you’re so hot.” Chances are she’s going to think you’re a total creep and beat a hasty retreat.

When you’re messaging a woman for the first time online, try talking to her like you would if you were meeting her in-person. Even if you’re not super suave, we’re willing to bet you can do better than “hi” or “you’re hot.”

Lame messages like “hi beautiful” or “how’s it going, sexy lady” aren't going to get you very far either.

A woman wants to know that a man thinks she’s worth his time and effort.

And resorting to cliché openers isn’t going to give her the right first impression.

If you want to impress her, you can start by reading her profile thoroughly.

Chances are, it contains information that will allow you to write a good opener. If you discover you share a hobby, that gives you a great way to get her talking.

For instance, you can point out that you’re both old movie buffs and ask what her favorite film is.

If you don’t come across a shared interest, find a way to let her know that you read her profile and find her fascinating.

Something like: “I bet you’d be a blast to hang out with. What do you do for fun?”

Asking a question that reveals your interest in her is a surefire way of getting a woman talking.

If you think telling a woman she’s “beautiful” or “stunning” will get your foot in the door, think again. Attractive women want to be valued for more than their looks.

So if you make your first message about her appearance, she’s going to assume you’re more interested in how she looks than who she is.

That doesn’t mean you can’t flatter her, though. It just needs to be done right.

Again, you can look to her profile for a hint. What qualities aside from her physical ones do you appreciate? Does she come off as witty, funny, smart or compassionate in her profile? Why not tell her.

If, for instance, her profile makes it evident that she’s intelligent, you can focus on that.

Instead, look for something interesting about her that reveals her intelligence, whether it’s her love of Shakespeare or the fact that she’s into computer coding. Letting her know how much you appreciate what makes her unique, is always a good move.

When a man values a woman for who she is as a person, he’s far more likely to get her talking.

A lot of guys fall back on generic compliments when messaging a woman for the first time. Of the 15% of men who try to use flattery in their first message, nearly two-thirds opt for “I like your profile.”

Not only is this super boring, but it also fails to get women talking. You may get a “thanks” back. Maybe. But don’t expect much more than that.

Offering general compliments like “you seem fun” or “you seem cool” not only show a lack of creativity, but they aren’t going to make a woman want to chat with you.

Your goal when you send a message is to make it as easy as possible for her to respond. And that means asking her a question that she’ll want to answer.

There are two basic rules you’ll want to remember when crafting your questions.

Good questions always express genuine interest, so when you ask a question, make sure it’s something you actually want to talk about as well. If you’re just coming up with stuff to get her talking, she’ll figure that out pretty quickly and the conversation will end.
Ask open-ended questions. If your question requires only a “yes” or “no” answer, it’s not going to spark a conversation. Instead, opt for questions that require more in-depth answers and allow for some back-and-forth chatting.

Using the information from her profile, you should be able to come up with a great message to get her chatting.

If her profile doesn’t offer up enough information for you to write a good message, you can try asking “what was the best part of your day?” or “how do you relax after a hard day at work?”

If you want to take it up a notch you can try asking about the craziest thing she’s ever done, where her ideal place is to live or what superpower she’d like to have and how she’d use it.

Women are really good at spotting players and pretenders, so no matter what style of message you send, make sure it shows off the real you.

If you send a generic message to multiple women, many of them will pick up on that. And that will make them less likely to respond.

The same goes for copy and pasting a great opener into your first message to a woman.

Your goal when you send a message is to make it as easy as possible for her to respond. And that means asking her a question that she’ll want to answer

Sure, it may get her talking, but she’ll notice if your personality or writing style all of a sudden seems to change.

While using suggestions from experts can really help, be sure to tailor it so it fits your personality.

That way both you and the woman you’re chatting with will know whether or not you have a real connection.

Getting sexual in the early messages is one of the biggest mistakes a guy can make in online dating.

Unless you’re using a hookup app where the sole objective is to get laid, you’ll want to avoid making suggestive comments of any kind.

Even if you see, “hey baby, I’d like to run my tongue over that sexy body of yours” as a great compliment, we can guarantee you that 99.9% of women will not.

Remember, women don’t want to be treated like sexual objects who exist solely for men’s pleasure.

So if you make a woman feel her only value to you is as a sexual partner, you’ve pretty much blown any chance of hearing back from her.

As we mentioned earlier, talking to a woman online the same way you would talk to her in person is always your best bet.

It comes down to this: if a woman doesn’t think you respect her, she’s not going to waste her time on you.

It comes down to this: if a woman doesn’t think you respect her, she’s not going to waste her time on you.

Don’t get us wrong. We’re not saying sex talk is off the table forever — just wait until you’ve built up some rapport with a woman.

If she seems like she’s into you, dip your toe in the water.

If she responds well, you’ve got the greenlight. Just make sure that it’s not the only thing you talk about.

Messaging women isn’t rocket science. It really comes down to:

Engaging in respectful communication.
Being sincere, authentic and polite, especially in the early stages of online dating.
Putting in some effort by reading a woman’s profile.
Tailoring your message directly to her well.

When you do the things above, let’s just say that your chances of a response are pretty darn good. So go the extra mile when you’re messaging a woman who has caught your eye. The extra effort is almost always worth it.

How To Get Back Together With Your Ex »