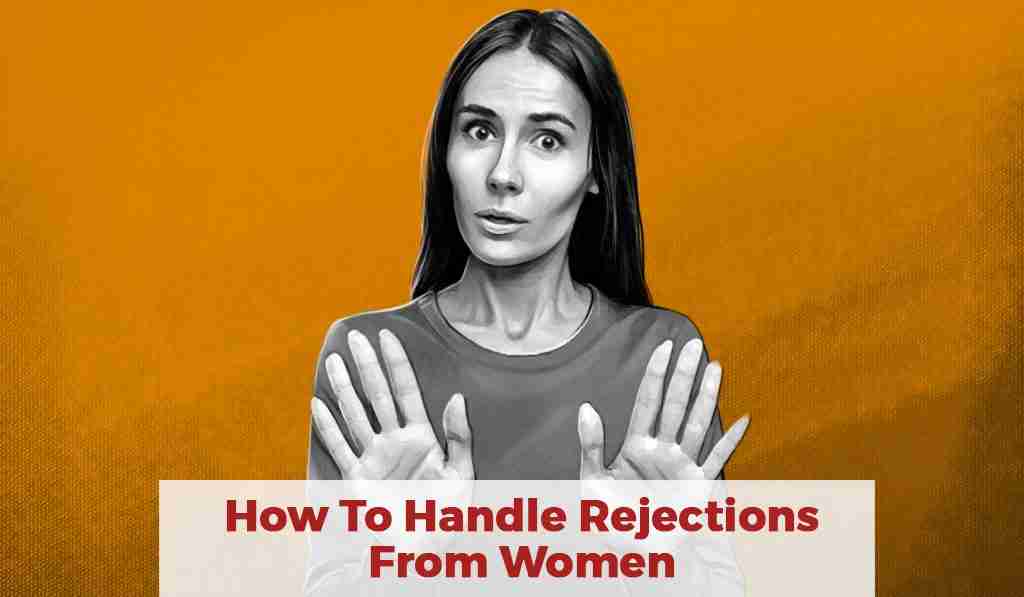 How to Handle Rejection From Women

If you've ever asked out a girl or your crush and you got rejected, or you were told you're "just friends", you know, it can be a major burn to your ego. Kind of hurts, right? Or maybe it hurts a lot because your personal identity is attached to the idea of her saying yes.

If so, you might be wondering how to overcome the fear of rejection or that bad feeling that comes after you have been rejected.

But first of all, it's really important to understand what it's costing you to have this fear of rejection or to allow rejection to really hurt you when it happens. When you get that burden from rejection, you could be very well tempted not to do it again either because it hurts so badly.

Not overcoming this fear or allowing rejection to unduly hurt you means you're limiting your options, because just like when you touch a hot stove as a child, you never do it again.

But by avoiding rejection in the future, you’re limiting your options. By avoiding any possibility of rejection, you'll never know who will actually go out with you.

You'll never discover which relationships you could have had, and you'll end up living with regret or frustration because you'll have avoided the women that you wanted to go out with. And that's something you'll be carrying on your shoulders.

You'll never reach your full potential if you avoid rejection, it’s just not possible. And you're also not giving your crush or other women you could have gone out with, the opportunity to say yes to you because you've rejected yourself. So basically, it's costing you a better quality of life and all the relationships you could have had, if you weren’t so afraid of it.

So what can you do to relieve some of that rejection anxiety?

Here are some steps you can take to not only deal with rejection if you get rejected, but also to deal with the anxiety about rejection before actually ask anybody else.

How to Deal with Social Rejection (Steps)

1. Get tougher by seeking more rejection

2. Breathing to calm your rejection anxiety

Number two, after rejection, focus on your breathing. One of the things that happens in stressful situations is that we start breathing shallow and that makes the anxiety worse.

You need to take control of your breath, take deep breaths and exhale slowly. This will calm the nervous system and allow you to clear your mind and start feeling like yourself again and not feeling so burnt from the rejection.

Number three, put it into perspective. Very often, maybe always, the idea of rejection is overblown. We end up taking it so personally and making it into something it's not by overthinking it and going into that scenario, and playing it in our heads over and over again.

Change your perspective and look for the positive side of the fact that you got rejected. You know, the things like the fact that you can get stronger, develop a thicker skin and handle rejection better in the future. There's many others as well, that, if you take a couple of breaths, sit down and think about from a calm perspective and not from the rejected perspective, will allow you to cope with the rejection better and create a better mind-set around it.

Number four, fix your post-rejection body language. One thing I see a lot of clients do after they go talk to a beautiful woman and ask her out, where if she says no, very often their hands will go into their pockets right away, or they will start looking at the ground, or they'll put on some kind of awkward facial expression, or something weird on their face that shows they got rejected.

They're showing their feelings, basically. Instead, adopt confident body language. Keep your hands out of your pockets, keep your head up, don't look at the ground and don't put an awkward smile on your face, right?

Which brings me to number five: Act like nothing happened. If you just walk away like nothing happened after you got rejected, same as fixing your body language, it will make you feel better because you're not going to exaggerate the whole event and make it worse than it actually was.

Number six, this is kind of more of a general thing, but you should get confident with women generally. If you lack confidence with women every time you try to ask somebody out, because there's been so few women that you've asked out, it will make those individual rejections so much worse, because you can you can literally count it on your hand how many times you've been rejected and how many times people have said yes.

So focus on getting confident with women by asking more women out and going out and talking to more women. Just like number one: getting rejected more, it will help you cope and help develop your confidence the more experience you get.

7. Don't Put Anyone on a Pedestal

Number seven, don't put anyone on a pedestal. Putting women on a pedestal is one of the worst things a guy can do, whereas confidence. Right?

You basically you're putting her up here. You're probably putting yourself somewhere down here. Right?

Women are people with a lot of flaws. And if you're putting them on a pedestal and using language like "out of my league" and these kinds of things, you basically end up idolizing them and kind of giving them celebrity status, which, they're not, they're just people.

Which brings me to number eight: Don't base your worth as a man on the opinions of women. If your value as a man is based on the opinions of random women, then you're going to be all over the place on this emotional roller coaster because as soon as the girl likes you, you feel great and on top of the world. As soon as the girl doesn't like you, you drop and crash at the bottom of the barrel and you feel like a piece of shit.

Now, instead, take the opinions of others with a huge grain of salt. Sometimes you can get constructive criticism and make yourself a better man, but very often opinions are going to be flawed and may not have much value.

So value your own opinion higher. And if your own opinion of yourself is very low, then you're gonna have to start working on building that up so that you're not stuck in this trap here with overvaluing other people's opinions.

Number nine, don't react to her. So if she says no, when you asked her out, don’t put on your frowny face. Don't look at the ground. Don't start acting using their sad voice or speaking quietly.

Stay normal, speak loudly, and smile. Don't have a reaction that shows her that you feel really bad about this. Because you shouldn't feel bad about it, and that reaction itself is going to make you feel worse. It also makes you look less confident, which is less attractive to women as well.

So even if there was any shot at all after the rejection, which very often there is, chances are you're shooting yourself in the foot now. And it's basically it’s closing that door behind you.

And number 10, move on. When a girl rejects you, it's time to move on and stop thinking about her. She's probably not as great as you think. You may have put her on a pedestal and built up the whole thing idea about being with her.

Maybe she's great because she's beautiful. Maybe she's nice, but odds are it's just lust and you’re acting on limited information and basically idolizing her and putting on a pedestal.

And just because the way, you know, the fact that she looks good. So move on, put her behind you, stop thinking about her and move on to the next woman. Go find somebody else to ask out or focus on yourself. Do something else. Everything doesn't have to be about women.

Remember, women are just a piece of the pie. It's a great piece of the pie, but you don't want to base your whole life and your self-worth and everything else you do in your life on the idea of being with a woman.

Be brave, be bold, and go out there and meet beautiful women using the information you have learned here today.

If you have any questions, positive success stories following this post, or even past instances where you gathered the courage to overcome those nerves, let me know in the comments below.

Until next time, conquer and win.