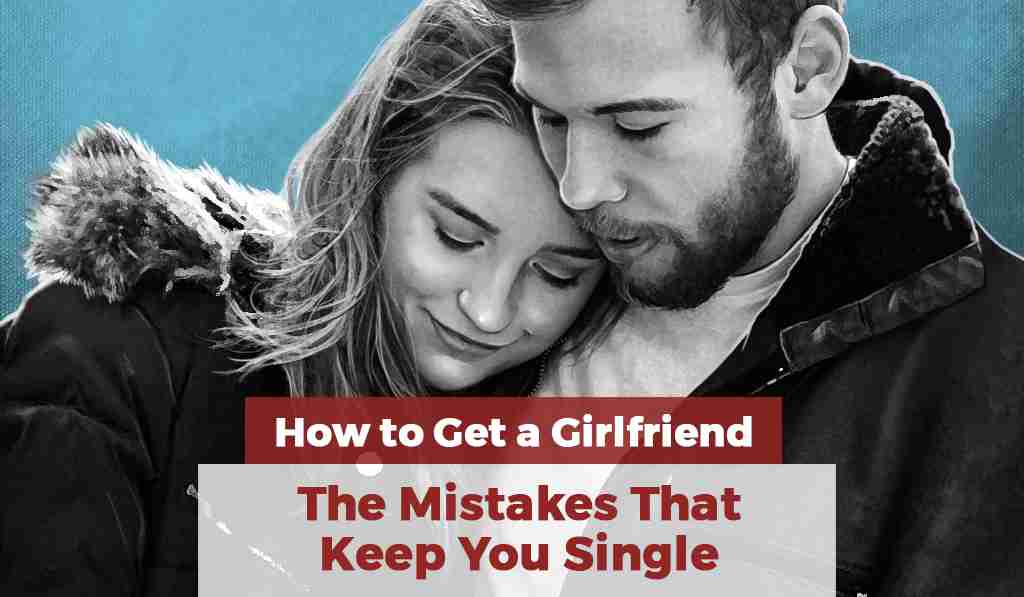 How to Get a Girlfriend (The Mistakes That Keep You Single)

Are you a bit confused about how to get a girlfriend?

Maybe you've been on a first date or had a relationship before, but they turn out badly, and now you're looking to avoid the same mistakes.

Maybe the relationship you did get into was pure luck, and you had no idea how it happened or how to do it again. Now, you want to actually live on purpose and be able to choose who you date.

If that's the case, keep reading because I'm going to go into the worst mistakes that guys make to get into relationships.

That's not all. It's important to know how to get that girl you really want. So, I'm also going to tell you the best way to get into a relationship with a high-quality woman who doesn't turn out to be a disaster.

Now, obviously, nobody is a psychic, including myself. So I can't predict how your relationship will go after you go on the first date with a new woman. However, by avoiding pitfalls and looking for these red flags, you're much more likely to avoid getting into a horrible relationship with a toxic woman and get into a good relationship with an awesome woman.

Much of this stuff has more to do with your character, personality, and confidence than it does with the woman you date. That's because the kind of man you are will dictate the kind of woman you date. If you're a guy who doesn't have balls or confidence, you'll probably overlook the red flags that are staring you right in the face. You're desperate and lonely, and you just want to take whatever is there. Very often, the kind of women who end up with a simp like that will take advantage of him.

I hope you become the kind of man I am today who never ended up in another toxic relationship again because I kept an eye out for the red flags. I became much more confident by working on my confidence and social skills. It completely changed my view on how I get a girlfriend. I learned to stay away from toxic women who take advantage of me just because of pure loneliness. I wasn't lonely anymore. I had options, and I've never ended up in a situation like that again.

The Top Ten Worst Ways To Get Into A Relationship

Dating a woman you work with may seem easy and sound like a good choice, but going after a woman in your work environment is one of the worst things you can do for your career.

There are many possible pitfalls here:

It's the same idea as dating your co-worker. You're stuck with them. I've worked with clients before who've dated roommates and ended up stuck in a terrible relationship. It's even worse than your work because you're living with her. There's just no escape. You can't go anywhere to get away from her.

In fact, one of the guys I started working with recently told me he ended up staying long days in the library just to get away from this woman he was living with after it went sour. So never date your roommate. You don't know what kind of person she is until you start dating her, and things are going to change dramatically.

3. Relationship After Sleeping Together

It's likely that after you've slept with her, you've only known her for a very short time. Now your emotions are getting involved, and you're like, fuck it, let's just be a couple. Or maybe she wants to make it official, and you're like, sure, what could go wrong?

Well, this is one of the worst things you could do. Don't jump into a relationship just because you slept with somebody. You don't know who she is yet. You don't know her personality. You should get to know her more before committing to her. Otherwise, this can become much more difficult later. Having sex isn't a good reason to get into a relationship, and it's also a sign of desperation.

4. Waiting To Make A Move

While playing it slow may feel comfortable, it's certainly not how to get a girlfriend. If you wait too long to go for a kiss or take her home, you can get friend zoned quickly. You have to take a risk and go for it. If you don't go for it, you're not going to establish what kind of relationship you want, which is romantic and not platonic. So if you don't make a sexual move, she's going to see you as just a friend.

5. Moving In Too Soon

If you move in with a girl too quickly, it's just like dating your roommate. You don't even know who this person is, and now you're trapped with them in your living environment. Keep your living environment pure and a place where you can get away from it all. You don't want to be in a place where you're going to be trapped with somebody who's potentially not a good fit.

Sure, you could meet a good girl at a club, but that's not how I get a girlfriend. It's a party environment with a lot of alcoholic influence. That could lead to both of you making bad decisions. When you meet a woman and go on dates, you want to know their true personality, not their inebriated personality. You've both falsy represented yourselves, even before the first date. Personally, if I want a relationship, I prefer to date women who are not into the party lifestyle. In the end, it will backfire on you.

It's a mixed bag. It's not that bad, but why not meet someone naturally instead of looking at profile pictures? It could also be a very mixed bag in terms of what you actually end up getting when somebody shows up on the first date. I've gone on a lot of online dates, and a lot of the times I’ve been catfished.

On the other hand, sometimes they're beautiful, but if you hadn't met her online and you saw her leaving the store one morning, would you actually know how to get that girl? If you take the time and put in the effort to meet women naturally out in public, with no alcohol and no swiping left or right, you'll have the chance to build yourself up as a man. You'll develop the social skills and confidence to meet the kind of woman you want instead of being behind a computer screen or phone.

8. Dating Out Of Loneliness

This can relate to many other items on the list. You jump into a relationship because you don't know how to get a girlfriend and you haven't had a date in a while, and then your friends introduce you to somebody. Or you run into somebody at work and jump into the relationship just because there's nothing else available for you.

Any woman who would jump into a relationship with a roommate, co-worker, or a person just after sleeping with them is a whole red flag. However, there are many other red flags you have to watch out for when you start dating a woman.

For one, how does she treat you? When you go out for dinner dates, does she ever offer to pay? Or does she let you pay every single time? That's a huge red flag. There are a lot of other red flags too. I know for sure I ignored red flags when I got into my toxic relationships. It's easy when you're feeling lonely. Still, it's imperative that you don't ignore these red flags because you can end up in a terrible situation.

So if you learn how to meet women, become comfortable around them, and get dates anywhere you go, you're not going to have this problem. You'll know how to get that girl who's perfect for you, and you're not going to ignore red flags because of neediness or desperation.

This probably sounds strange for most of you because most of you probably wouldn't do that. Believe it or not, there's a lot of guys who will talk to a woman online and in some cases, not even actually anything to verify they're even talking to a woman. Then they'll somehow end up in a relationship. That's what can happen when you don't know how to get a girlfriend.

Even if you do call or video chat, things can change dramatically when you finally meet and go on a first date. So never get into a relationship with a woman you haven't met. It's probably one of the worst decisions you could ever make.

How To Have a Good Relationship

You don't need to have a lot of money. The fact that you're able to support yourself and do well in your life and feel good about it will exude confidence. People are going to feel that.

Also, if you get into a relationship, you'll be able to build a future together and not rely on handouts. I know how that feels, and this is definitely a blow to your confidence and contributes negatively to your relationship.

﻿The next secret to how to get that girl is to go out and meet women.

How do you do that?

Well, check out my guide on meeting women. It'll tell you about how I get a girlfriend; how to meet women naturally in public. If you expand your options, you can get a date any time you go out. You're not going to feel lonely or desperate or needy because you've always got another option. You're not going to choose somebody bad for you simply because there's nothing else available.

Plus, the act of starting conversations and overcoming fears is going to help you develop relationship skills to hold onto a relationship for the long run. You're going to gain dating experience along the way with different women you meet, which will contribute to your future long-term relationships.

How Can I Become Better At Dating?

It's much better to get into a relationship after you've had a lot of dates. You don't want to be the guy who hasn't had any and doesn't have a clue how to get a girlfriend. You'll only be building all the experience with the women you just met instead of coming into it prepared. Which usually leads to the demise of relationships when you don't know what to do.

NEVER Take Women to Dinner On a Date (Attraction Killer) »