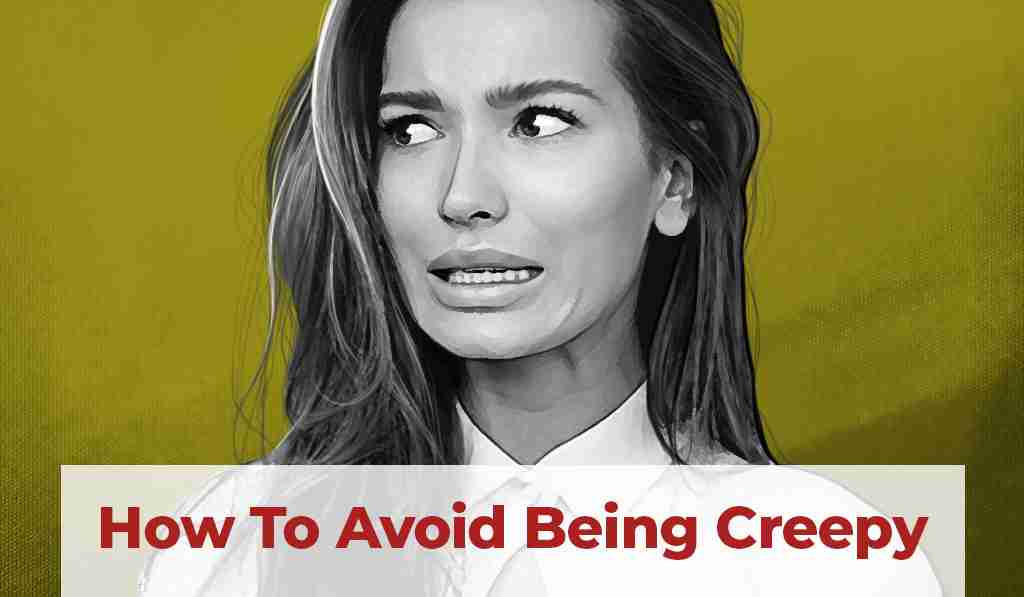 How to Avoid Being Creepy

Do you really want to approach girls and start conversations and get dates, but you're worried about being creepy because you don't want to be "that guy"?

I get this question all the time about how to avoid being creepy, but it's always the guys who are worried about being creepy, who end up being the creepiest. And I'm going to explain exactly why that is and the steps to avoid that in this video. So keep watching.

Now, avoiding being creepy is easier than you think. If you're one of these guys who's really worried about being creepy, if that's your focus and the reason why the guys who end up being the creepiest are the guys who are thinking about it all the time is because that's what their focus is.

I always like to make the comparison or analogy about target fixation. If you're a motorcycle, you probably know what target fixation is, it's basically like if you're going around a corner, going left, and you see a tree to the right.

Well, you don't want to go to that tree. But if you if you actually turn your head and you're looking at the tree while you're trying to go left, you will start moving. Right. It's just the physics of riding a motorcycle. You're basically going to go in the direction that your head turns and your eyes are looking.

So what happens when guys are worried about being creepy is they're focusing on the wrong things, and they're going towards being creepy. It alters their behavior in a weird, unnatural way, which gives that creepy vibe because they're acting strange instead of being themselves.

If you're worried about being creepy, you're probably being really self-conscious and micromanaging all your movements, your eye contact, your facial expressions, the way you use your voice. You're probably just trying to control everything. And that's really difficult to do without coming across like a robot or someone weird.

The place where your focus should be when you're having a conversation. With a girl is on her, you shouldn't be self-conscious worrying about every single thing you say and how you're standing and how you're looking at her or how she's looking at you.

You shouldn't be wondering what she's thinking about you. You should be actually trying to learn about her and being curious about her. This will prevent you from giving off some of that weird, creepy vibe or giving unusual behaviors that come across as creepy because you're focused on the right things.

You're focused on learning about the girl you met. Now, that's not the entire picture. There are some other things that can also give up creepy vibe as well and repel girls. What usually accompanies this focus on being creepy is a lack of confidence.

Now if you're not really confident, it's going to take a little while to build this up and you're going to have to get some experience. But here's a few more things you can do in the meantime to build up your confidence and not give off the wrong vibes.

First of all, make strong eye contact. Whenever you're engaged in a conversation, your eyes should not be darting around the room. Or looking at the ground. You should be looking at her eyes. And if it feels uncomfortable.

Just let those butterflies you feel put a smile on your face because that's what it's going to do if you keep looking into her eyes. It may seem like looking into the sun, but you'll get used to it quickly and it'll feel good as well. And she's going to probably smile as well.

The next thing you should do as well is stand straight and tall and you should also be facing her depending on the situation. You should be facing her squarely because nobody has a conversation turned to the side like this again, with some exceptions.

But normally such as in the case when you approach a girl on the street, you're going to be facing her square, not not at an angle that shows a lot more confidence...You want to have open chest.

Now one of the biggest factors to avoid? Being creepy is to pay attention to her space. Don't invade a girl's space. As soon as you go approach her and talk to her. It doesn't matter what the situation is. There should be a comfortable distance between the two of you. And this is going to change depending on the scenario.

But most of the time, if you can reach out and you can't touch her, you know a good arm's length and a bit, that's probably a good distance, more or less, unless you're really short you might want to lengthen it a little bit more.

But that's probably one of the number one things I've seen and heard from women about guys being creepy is when they actually get right in their faces and invade their space. Nobody likes it when somebody they don't know just pops up in their bubble and does that close talking thing, that can be really uncomfortable.

And another thing that's going to be really helpful is just learning to pay attention to social cues. If she's leaning away from you or turning away or trying to walk away, she probably doesn't want to be in the conversation.

So you shouldn't try to force it. Now, depending on how much experience you have, it'll probably take some time to learn the signals a woman gives off when she doesn't want to talk to you or if she feels uncomfortable.

Most of us have some sense, though, about when a person is uncomfortable and doesn't want to talk to us. Usually, they're showing disinterest by not really paying attention or looking away or they're creating more space or they're kind of starting this "slowly move away".

That's what it feels like when you're trying to break that tractor beam of this overly chatty person, an escape from them. And they obviously don't get the fact that you're moving away from them, that you're not interested in having a conversation. Obviously, you don't want to be that guy, so pay attention. If she's walking away, then just wish her a good day and leave it at that.

Also read: 12 Tips to Improve Your Confidence and Become Good at Dating

Now, I want to know what you think. Is there any way that you've started a conversation before that's a little bit different, or have you gotten dates in public before by casually starting a conversation, comment below and until next time conquer and when.

Why You Should Never Put Women on a Pedestal »