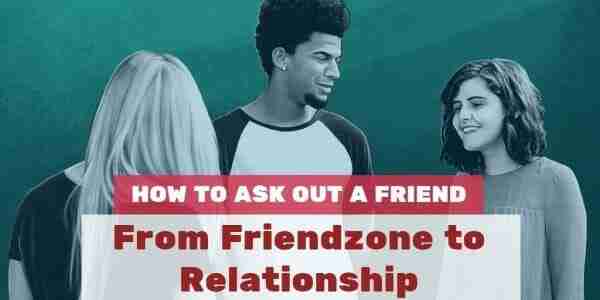 How to Ask Out A Friend: From Friendzone to Relationship

Have you been friend zoned and want to date her, but don't know what to do?

Asking out a stranger is easy.

Ok, maybe not easy but if we’re talking about risk vs. reward, asking out a gorgeous woman you’ve never met before has literally no risk and plenty of reward.

At least, it's way easier than trying to get out of the friend zone by asking out a friend.

What’s the worst that can happen? Sure, you might get run over by a bus on the walk over to her. But chances are she’ll either say yes (awesome!) or no.

If she says no, no harm done. Just move on with your life and onto the next woman of your affection.

Check out this First Date Mega-Guide

If she says no, maybe you could lose your friend and possibly others in your social circle. Even if she says yes, it may not work out and again you’re risking quite a lot.

But you know what they say: nothing that’s worth having comes easy.

The biggest gambling winners are those that risked the most. Well, I say play smart.

Looking back, I’ve been on a hefty number of dates, many of which with people I was already friends with.

I’ve learned how  to ask out someone you’re already close to and I’ve done it by failing - a lot!

Avoid my mistakes, mitigate the risk and ask out your crush in the best way possible.

First identify if this is really what you want.

It may be that crossing that line into an official relationship isn’t exactly what you want, it just seems that way because you’re both close to one another.

This is even more true when you haven’t dated anyone in a while, the lines between friend and partner start to blur.

The best way to find out if your crush is 100% genuine is to date someone else.

Allow your mind to focus on someone new, if even then your mind starts to wander back to your friend, then we may be talking about the real deal here!

2. How Not to Ask Her Out: The Biggest Mistake

There’s one thing you don’t want to be doing - and that’s professing your love in a big romantic way. Chances are that’s not going to work, even if she likes you too.

The best way is to ease into the idea of you two being more than just friends.

Try subtle flirting, paying her a compliment. Make her aware that you’re looking for something a bit more serious, but don’t do it in a way that’ll scare her off.

I did say I’ve learned a lot from failing, but I learned about easing into a potential relationship with a friend from someone else’s mistake - thankfully!

A friend of mine had a massive crush on one of his female friends.

In his mind, the best way to get her affection was a big romantic gesture.

Despite our advice and pleas to take things casually, he decided to profess his love at her surprise birthday party.

No warm up, no subtle flirting beforehand, just straight from a normal relationship to ‘I’m crazy about you and I’m going to tell you in front of everyone you know’.

As you can imagine, this went poorly.

My friend’s crush ran away in embarrassment and my friend was left alone at a very awkward surprise party.

Not long after, it transpired that she had feelings for my friend all along, but it was the big, immediate gesture that dashed any hopes of that happening.

It can be difficult to change how we view people in our lives. If you’re in a relatively new friendship, it isn’t too difficult to make her view of you change into something more romantic.

The longer that friendship lasts however, and the longer she views you just as a friend, the harder it is to change that perception of you.

So start making your move as soon as you can.

4. How to Make Her Want You

The one thing many guys do that keep them in the friendzone is - in short - act like a friend.

You want her to naturally want you, not desperately try to persuade her to want you.

Step back once in a while and let some space grow between you, allow her to miss you a little, rather than you being there 24/7.

Be friendly but not a doormat, don’t be afraid to say no or to ask her to do what you want. Stay confident but not boastful or creepy, maybe tease her a little about how she actually likes you.

This piece of advice became very apparent with one female friend of mine.

We had been friends for years but for a few months we had been subtly flirting. Things were going well and I thought there was a shot of us becoming more than friends. However, things never really progressed. We’d flirt, have fun, but nothing more.

I thought the answer was to turn up the dial, flirt even more, see her even more. Do anything to progress what we had going. But still, nothing ever changed.

Tired of winging it and trying to figure out what to say?

Learn how you can confidently get the kind of love life you want (even if you're not confident).

Watch my free video by clicking the button:

Looking back, it’s clear to see how desperate I came off. In trying to find as many opportunities to see and flirt with her, things got a little weird.

At parties, she’d be someone I spend most the night with - even if I was gatecrashing her and her friends.

If I randomly bumped into her (we did go to the same college), I’d see that as an opportunity to talk to her for ages, keep the conversation going as I thought that’d help progress our possible relationship.

It wasn’t until I stepped back did things finally start to work.

I’d pretty much given up and after giving her a little space, she started to chase me instead of me chasing her. I’d flirt but tried not to appear invested, I’d go to parties she was at and wait for her to approach me.

By giving her that space, not only could I clearly see she wanted something more, but she started to miss our time together. From there, things progressed rapidly.

5. Find out if she likes you

All of these changes of how she views you are necessary for getting out of the friendzone.

You can tell if she actually wants to take this to the next level by how receptive she is to the above. Is she showing a desire to get closer to you? Is she responding to your flirting?

Being her friend means you have an upper hand, you already know her and her typical behaviour. You should be able to judge how receptive she is to your change in attitude.

This is where many guys, me included, get things wrong.

Moving things to the next level isn’t just about what you do, it’s also about what she does.

Now, these will be different for each potential partner, but some giveaway behaviours I’ve observed that you should look out for are:

Does she hold eye contact with you? Not just friendly eye contact, but eye contact that last just a bit too long. If there’s eye contact even when you’re both not speaking - that’s a big tell. Now if the person is naturally shy, then not giving eye contact isn’t necessarily a sign they don’t like you.
Mirroring. By copying your movements it shows she’s in tune with you, she’s invested in you and your personality
She goes out of her way to touch you. This is different from a subtle arm touch or head tap. The important part is that they go out of their way. Did they have to move a lot to touch you? Did she touch you shoulder because it fits with what she was saying or was there really no obvious excuse?
She leans into you when you’re talking, when they could hear you perfectly if they moved back.
Asking you questions. Do they want to hear what you think? Are they keen on including you in wider conversation?
Is she touching objects while she's with you, fiddling with keys or stroking a glass whilst keeping eye contact?

There’s no way to shoot the gun without pulling the trigger.

The above points will have helped change her perspective of you. While her change in behaviour towards you is what gives you the confidence to know whether or not she feels the same way.

The best way to go about asking her out is to be direct but casual about it.

Again, if she’s receptive, continue with it and ask her out a date.

Don’t suggest an activity you could easily do as friends, you still want to continue that change in perspective.

Try something more romantic. Not something like going shopping or staying in to watch a movie!

You’ll hear a lot of people say if you’re asking out a friend, timing is the most important thing.

For me, the idea that there’s a good time makes it easier to chicken out.

Unless something’s happened that would make asking her out a stupid idea (a recent big breakup, a family member dying) then just do it.

If you want to do things right, there won’t be a super obvious time to ask her out, instead it will feel like a natural progression.

There won’t be a big ‘now’s the time’ beacon, but it won’t feel rushed or out of nowhere.

8. How You Overcome the Fear

This is the biggest fear that stops guys from asking a female friend out, but the truth is it’s more of a one-sided fear.

Do you honestly think you’ll be the first friend of hers that actually wants to date her?

If it doesn’t work out, it only makes things awkward or ruins the relationship if you let it.

This is more weird for you than it is for her, so accept it and move on.

If you’re ok with going back to just friends, then simply go back to how you used to be and very quickly things will be back to normal.

If your feelings are too strong to go back to being friends, you’ve got your answer, so it may be time to walk away.

Either way chances are she has quite a lot of male friends who secretly want to take things to the next level too.

But whether or not it worked out, well done to you, you actually had the balls to do something about it!

Make sure this is something real, crushes come and go. There’s no sense doing this unless you have genuine affection for your friend.
Save the big romantic gestures for the movies.
Don’t be there 24/7. You want to be her stud, not a lap dog.
Watch her behaviour; when you’re flirting is she reciprocating?
Ask her friends, they probably already know your chances.
Yes, you’ll have to bite the bullet and ask her out. But do it in a casual, even flirty way. No need to get on one knee!
Don’t be upset if things don’t work out. This is probably not the first time she’s turned down a friend and it probably won’t be the last. If you want to, you can still be friends.