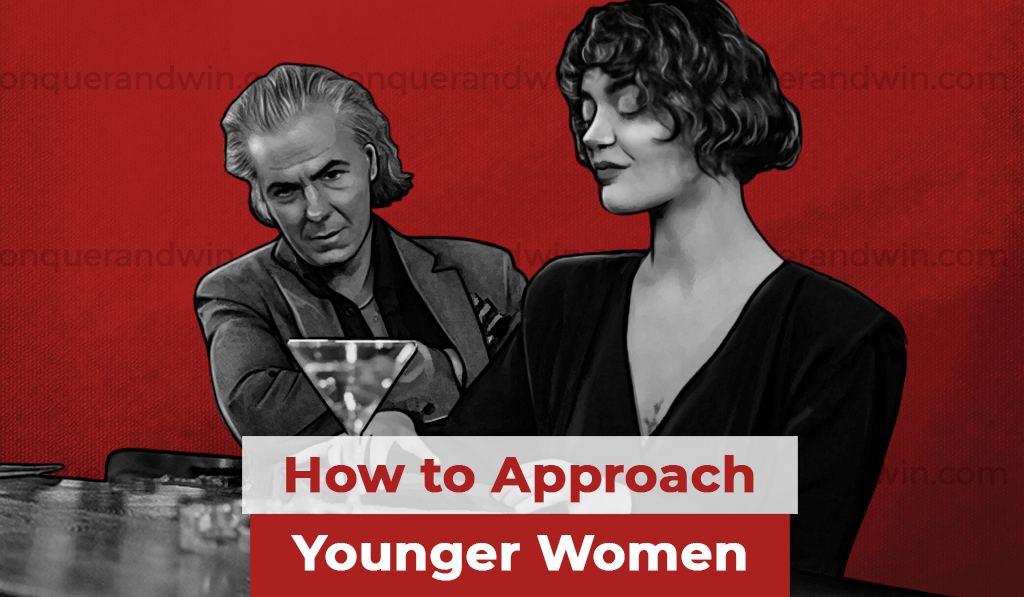 Are you a man who's interested in approaching younger women?

And much more. Continue reading to learn more:

How To Start Attracting Younger Women

First of all, it's a fact that women like older guys and guys like younger women. This has always been the case. On average, this means an age difference between five to ten years, but it can be much wider.

My wife, for example, is eight years younger than me, and I've dated women with a much wider age gap. A lot of guys are really self conscious about age, and so they don't understand how to attract younger women.

In fact, being self conscious about your age is one of the things that's going to repel younger women. Just by the fact that you're focusing on it, you're going to bring that to attention in a negative way.

Here's my list of what you can do right now to start attracting younger women:

Either your age or her age. Yes, it's nice to be with a younger woman. We all know why. We don't have to go into details here.

Yes, it's nice to date younger women. But, focus on finding the right woman instead of trying to find a woman in a certain age range. The right woman could be close to your age, or she could be much younger. That doesn't matter.

What does matter is that if you're with a much younger woman and you're not compatible with her, it's not going to work out. No matter what.

#2. Get Fit And Work On Your Style

If you want to attract younger women, you need to be in good shape and dress well. And dress well for a man.

Most of these things I'm telling you about are going to help build your confidence, including getting fit, working on your style, asking women out. This all takes time.

But, you're going to want to focus on confidence being the key to attracting women. Because if you want to attract younger women, that's what they're going to be looking at.

If you're 70 years old, it's very unlikely you're going to get a 20 year old woman. Not impossible. There are always exceptions. But on average, that's not going to happen.

If you find someone closer to your age, you're much more likely to find good candidates. But hey, like I mentioned, the age gap can be quite large.

So, you decide what age range you want to go for. But keep in mind that it's going to be more difficult the younger you're aiming at and the older you are.

#5. Prepare To Go Through More Numbers

You're going to have to ask a lot more women in the age range you're looking for, especially if they're much younger.

#6. Understand What You Want

A younger girl's not necessarily going to equal relationship material. If you're not looking for a serious quality relationship, that doesn't matter.

If you're looking for the physical part, that's great. Going for younger women is going to work out no matter what.

But, if you want a quality long term relationship, the younger you go, the less likely you are to find that kind of relationship with somebody who’s much younger.

Especially girls in their early 20's. They're developing quite fast. Their ideas are changing, what they want is changing.

So, even if you start dating one, they may not want a long term relationship or a husband. You're going to be better off aiming at late 20's or early 30's. Women in those age ranges are much more likely to want to settle down and actually find a long term partner.

Don't focus on age. The first thing you do when you approach somebody, you should already be able to tell that she's younger than you. As soon as you see her, that's going to be obvious.

And if she wants to go out with you, that's great. Stick to that. You're going to find out both your ages eventually, but it shouldn't be your focus.

Don't start asking age questions, especially by text. That's even worse, because all you're doing is bringing attention to that. It shouldn't be the main focus. And if you're self conscious about age, that's going to be a huge negative.

Focus on your personality, what you want to do on the date. Age is not really that important in the beginning.

How To Do The Actual Approach

And finally, how do you do the actual approach?

I'd recommend cold approaching, approaching women in public and not doing online dating.

You're much more likely to be filtered out by the filters they have on online dating. They're going to automatically look for a certain age range and you're not going to pop up in their feed.

There's no difference here. Attraction works the same across all age ranges.

Here's a summary of the things that you can do right now to start approaching younger women:

If you want to learn how to do the actual approach, check out this link.

And if you've got any questions or comments, leave them below.

How To Be More Approachable To Women »