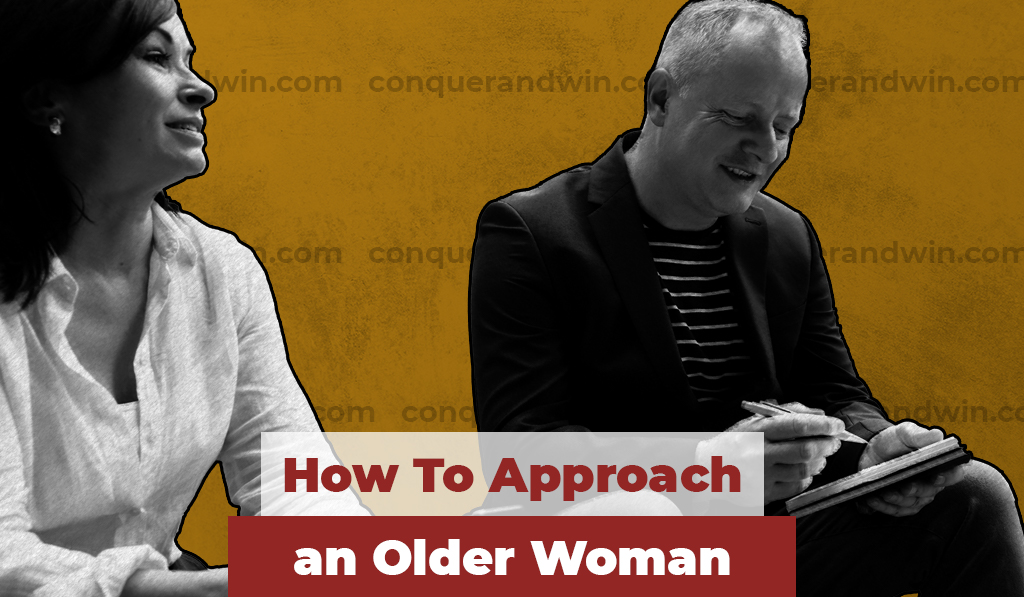 How to Approach an Older Woman (2 Eye-Opening Differences)

If you're interested in MILFs, cougars, or mature women, then keep reading. I'm going to explain exactly how to approach an older woman. I'll also reveal the main differences between approaching an older woman and a younger woman.

If you already know how to approach and attract women, then you know there isn't much of a difference between approaching women of any age range.

But there are some differences in personalities and what women are looking for at different stages of their lives..

Older women will usually have an established career by this point and already know what they want in a relationship.

Whereas younger women, such as those in their early 20s, are usually still developing quite rapidly. Their ideas are changing very quickly, and they usually don't even know what they will do in their future careers.

Because of that, there will be major differences in the kinds of relationships you might get into with an older woman versus a younger woman.

Because younger women's ideas are changing rapidly, they may not be good for a long relationship. They're going to change over time, and they might leave you in the dust because they're going to be a different woman after a few years.

Meanwhile, an older woman is already established, and all her ideas, lifestyle, and what she wants are pretty much set.

There will be changes over the years for everyone, of course, but it won't be as rapid as it would be for a woman in her early 20s.

Kinds of Relationships You Can Have with Older Women

But keep in mind that an older woman will want somebody who can hold their own, a confident guy who can take charge and not a guy who's looking for a mommy.

Many older women will be open to sexual relationships or having a boy toy with a younger guy. Still, many will also have the mindset, "I've been there and done that, and I'm not looking for that anymore."

I've been with many older women myself. It can be a lot of fun because often they're relaxed, and there are no major expectations. That can lead to a great time as long as it's clear your relationship is sexual.

Otherwise, you can get into trouble if you give the wrong impression that you're looking for a serious relationship when you're not. You never want to do that.

What if you meet a woman who's basically damaged, as in she brings up her exes all the time, and she's projecting that stuff onto you or men in general? Then it's time to hit the road.

You'll never make her think men are better now because of you. She's already carrying these ideas and has probably been doing so for a long time.

She's constantly asking for validation. She wants compliments all the time, but at the same time, she rejects your compliments.

For instance, you tell her she looks great, but she says, "Oh, no, no, no." She turns it down.

When this happens, it's time to get out of there. You'll hear this kind of thing all the time, and it gets tiring after a while.

This is probably the worst one. She's trying to control you, and if she always wants to know where you are, that will likely get worse.

You are going to want to hit the road quickly. Even if it's just a sexual relationship, it's not worth sticking around for something like that.

For full details on approaching women, read my How to Approach Women Ultimate Guide.

How to Approach Asian Women (5 Steps To Communicate Better) »