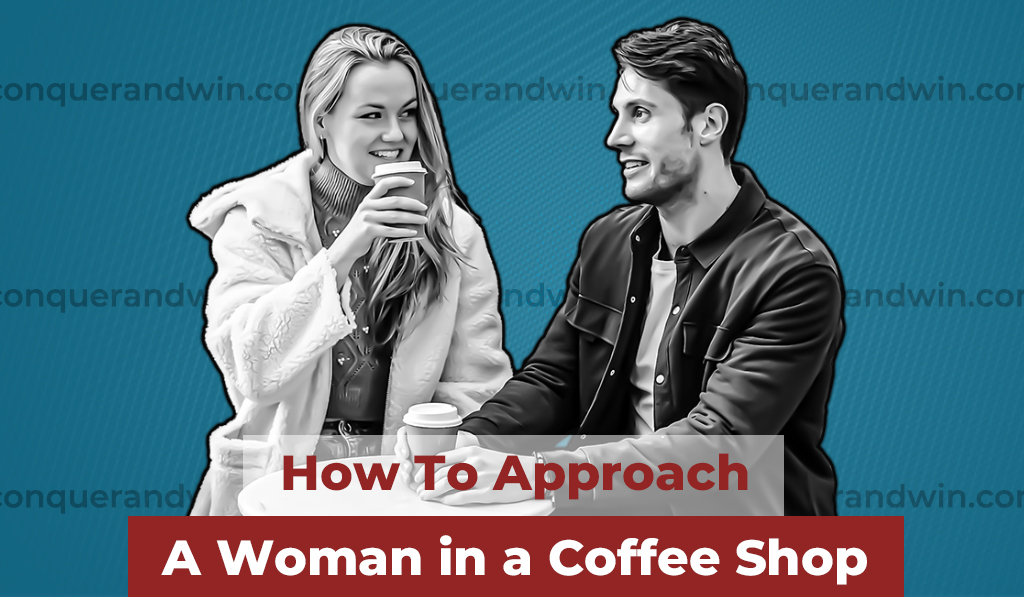 How to Approach a Woman in a Coffee Shop

You're grabbing a coffee at your favorite cafe in the morning, and you see a really attractive woman. Now, you're wondering how to approach a woman in a coffee shop.

If that sounds like you, keep reading. I'm going to explain exactly:

How to Approach a Woman in a Coffee Shop

This will depend on the context, so I'm going to break this into four different categories:

#1. How to start a conversation in a coffee shop line

Start by making a simple comment, something that's relevant to your shared situation or context.

There are tons of things you could possibly say, and you'll get better at this the more observant you get.

One thing I do often is just commenting on how loud it is, because some really busy coffee shops get really loud and sound like bars.

If she reacts positively and she's kind of chatty, then keep going.

If she gives you a quick answer, or if she's all business and not super responsive, then leave her be.

It's just a comment, after all. It's no big deal.

#2. Starting a conversation while seated in a coffee shop

This can be done the same way as when you’re in a line with her, or you can do a question opener.

You can ask her about the cake or coffee she’s having.

Another good observation is when you see a woman studying.

Keep in mind that women studying in a coffee shop very often have been studying all day. Very often, they've had their head down, their neck hurts, and they're very happy to talk to a cool guy who starts a conversation with them.

But as with the first example, if they give you a quick, all-business kind of answer, or if they don't seem particularly chatty, then just leave them be.

#3. Approaching a woman directly in a cafe

This is what you'll do if you have to get up and walk over to her.

Just be direct and say something like, "I was just sitting over there having my coffee, and I was really distracted, and I couldn't help myself. I had to walk over here and say hi because I thought you look fantastic."

There's nothing special about the words I just used. Just use your own words.

Explain the situation and be direct. Tell her why you're talking to her.

#4. Approaching a barista in a coffee shop

This is often more difficult. You have to work fast because most of the time, there will be a line behind you, and you won't have much time to chit chat. But just make a comment or ask a question.

Focus on her and try to get her to open up and talk about herself. And you can also go direct, as with the last example.

Now, there are many things you can say here.

One time, I was talking to a very cute, tall, blonde barista who turned out was from Sweden. How did I find out? Because I noticed her accent and said, "I noticed you have a little bit of an accent. Where you from originally?", and she mentioned where she's from.

And that just led to a very easy conversation. I then asked her why she came over all the way to Canada. I took the conversation from one step to another until I asked her for her number. We went out soon after that.

Now, while you won’t always have an accent to work with and ask them where they're from originally, there are many other things you can comment on. Just keep your eyes open and make a comment or ask a question.

It could be about jewelry, the environment, or why they're working there.

Often in coffee shops, the people working there are students. They're in university, and it’s not a lifelong career for them.

So there are different questions you can ask that lead in that direction as well, such as: “Are you a student by any chance?"

And you get into a conversation about her.

Some Tips for Approaching a Woman in a Cafe

Don't speak quietly. Don't look at the ground. Don't act like you're depressed?

Have some enthusiasm when you're talking to women.

This also affects how you sound in terms of being enthusiastic or not. Make sure she can hear you, especially if you're in a loud coffee shop.

Much of this stuff could be habitual, so if you do it regularly, you need to do exercises and stretches to release the tension holding you in the wrong position.

You must have confident body language as it says a lot about who you are as a man.

Here's a quick story. At a coffee shop, I saw a beautiful woman who was reading. I then asked a quick question about her book.

After I asked that question, the rest was very easy. She told me she was studying nursing. She was very chatty, and I didn't want to have to say too much from that point.

In fact, she was so chatty I had to close the laptop I was working on, because I couldn't really continue anymore.

After a little while into our conversation, I asked her on an instant date. I said, "Hey, I'm going to go over to the beach. Why don't you come with me?"

She accepted my invitation. We went to the beach, where we chatted a little longer. And after just sitting there for about half an hour, I invited her home.

I said, "Hey, let's return to my place." Now, she was surprised by this, and so she paused for a second. Then she came up with an excuse.

She said, "Oh, I gotta go home. I gotta do more studying."

I didn't push. I simply said, "Hey, I gotta go do some grocery shopping. So on the way back to the sky train, why don't you come with me?"

And we ended up doing the grocery shopping together.

And as I was leaving, it was obvious that she still wanted to hang out.

She asked, "What are you going to do?" even when she already knew I was going home.

So I said, "Well, I'm going to go home." And I invited her again, and this time she said yes.

And it all started when I asked about the book she was reading at the coffee shop.

At that point, she figured it was okay to go to my place.

There are many ways you can achieve this. If you want to take someone home from any kind of situation, you just need the confidence to ask them out in the first place.

And when you do approach a woman in a coffee shop:

And for full details on how to approach a woman, read my Ultimate Guide here.