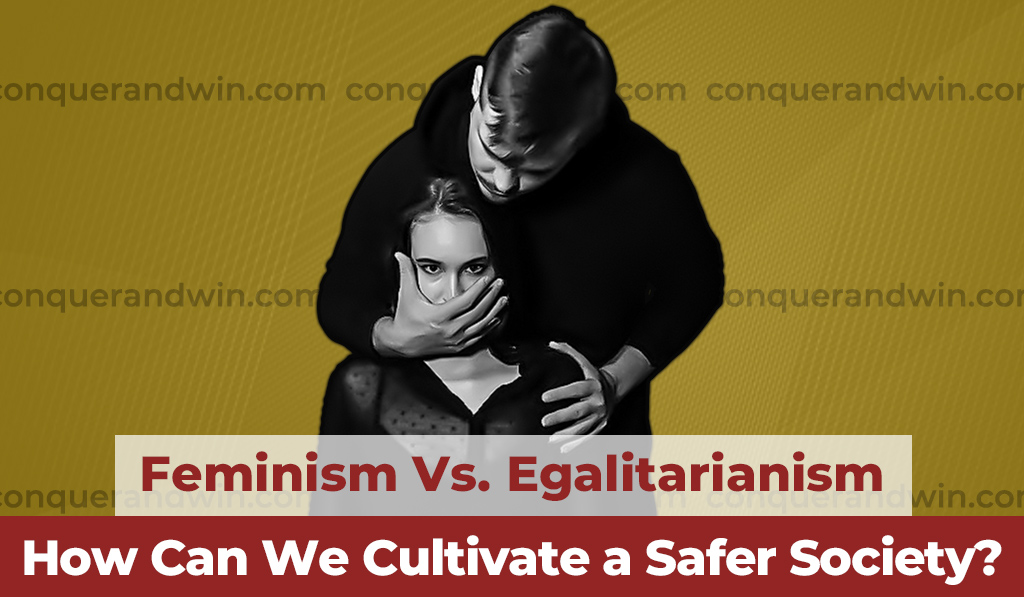 Feminism Vs. Egalitarianism: How Can We Cultivate a Safer Society?

Violence has roots, so does suffering. Both feminists and egalitarians have suggested ways to cultivate a safer society. Yet, some people are surprised to learn that the practice of distributing compassion equally is an important way in which egalitarianism differs from feminism. This difference is tragically striking when it comes to the issue of child abuse.

Unlike egalitarian reasoning, feminist ideological assumptions lead to diminished compassion for the suffering of non-women, including men and children, because of how ideology subconsciously affects judgement. For example, egalitarianism seeks to overcome this problem while leading media feminists such as Jessica Valenti insist on calling certain civil rights advocates “whiny” for challenging her on how she distributes compassion.

If one looks carefully at her stereotype of Men’s Rights Activists, the parallels with psychological profiles of adult victims of child abuse are uncanny. Moreover, the delight she takes in using sardonic feminist in-jokes reveals an entrenched boundary in her compassion.

Egalitarians find her patently feminist outlook toxically inhumane. What about the value of those lives burdened by child abuse? Would we not cultivate a safer society if we ensured that abused children’s developmental needs were better met? When victims of abuse get mad at feminists for denying their voices, look at who treats their points of view as worthless.

It is not surprising that Men’s Rights Activists get angry at feminists for making ideological assumptions. Feminist media icons commonly exhibit an in-group mentality that leads to social injustices. And yes, some feminists are not into that way of thinking. But nevertheless, young feminists in the education system today are increasingly opposed to moderates in their own movement for sometimes applying egalitarian, rather than feminist, principles.

Many (but not all) feminists agree that we should bring an end to child abuse. Yet feminists like Jessica Valenti intentionally write articles for the sake of antagonizing members of a movement with a disproportionately large number of adult victims of child abuse in it.

And like a bully, she hides behind the claim that she is just “joking”. This is patently inegalitarian behavior. From an egalitarian perspective, everyone’s journeys in life are equally legitimate. Imagine being one of those abuse victims, getting attacked publicly by feminists who share her ideologically-driven opinions. Fixing the problem of child abuse necessarily involves acknowledging how feminist ideology is part of the problem.

On the surface, most (but not all) feminists do not find child abuse any more acceptable than egalitarians. However, when it comes to responsibility and accountability in actual cases of child abuse, feminists and egalitarians differ substantially. Egalitarians distribute compassion evenly, unlike feminists.

Both groups recognize that child abuse is the root of numerous social problems, but egalitarians are more interested in cultivating safety for children who are being abused. The outcomes of all parties affected by child abuse are important to egalitarians, so they find the feminist notion of “patriarchy” grossly inappropriate as a framework for understanding the problem.

The most common form of child abuse is Parental Alienation Syndrome. It burdens children – future adults – with a lifetime of shame and self-hatred. It is also connected to a myriad of personality and health disorders. For people who suffer in this way, shaming tactics are disgustingly inappropriate.

In North America today over 35% of children live in single parent homes. 83% of parental alienation is committed by the parent who has the majority of custody hours, and women in Canada are typically awarded 75% or more of custody hours by family courts.

Mathematically, it is an inescapable conclusion that single mothers abuse children more than anyone else – and researchers have repeatedly measured this effect: “Approximately 40 percent of child victims were maltreated by their mothers acting alone; another 18.3 percent were maltreated by their fathers acting alone; 17.3 percent were abused by both parents.” (source)

I once brought up this information in a debate with a professor of Women’s Studies, and her prefabricated ideological response was to start by defending single mothers. She organized her argument in such a way as to downplay or trivialize mothers’ responsibility for causing harm.

She spoke of how hard it is for women to raise kids on their own. She pointed out how children sometimes push buttons, and concluded that hitting them is sometimes inevitable when a single mother is overwhelmed by stress.

To summarize her argument, she blamed that stress on “systematic oppression by the patriarchy” and cited an example of gynocentric reasoning as evidence for her conclusion. She then closed by bluntly asserting that fathers are less of a problem when they accept greater responsibility for taking care of kids, and gave two examples of “dead-beat dads”.

Is the father-child bond any less meaningful to a person’s life than the mother-child bond? The distinguished professor never expressed any concern or compassion whatsoever for men who protect their children from abusive mothers – a job made more difficult by the lack of shelters for male victims of domestic abuse.

She conveniently left out how often vindictive mothers interfere with divorced fathers’ rights to access their children. She ignored the fact that men have formed organizations so that they can be involved in their children’s lives, and she completely ignored the questionable ethics of the family maintenance system.

What about children’s biologically-driven identification with their fathers? An undeniable suffering arises when that bond is denied to a child. Rather than distributing compassion evenly, feminist ideologues are notorious for making excuses on behalf of child-abusing mothers as if children are somehow less important. This one concluded that male-dominance is to blame for women who abuse children.

She displayed a boundary in compassion by using feminism as a shield for abusive mothers. An egalitarian would consider the suffering of children and fathers in these tragic situations as equally central. Like most feminist ideologues, this professor did not.

Would a feminist make excuses for rapists? I imagine this Women’s Studies professor would give a failing grade to any student who did. Yet like rape, the consequences of child abuse are frequently severe and enduring. So why did she aggressively focus on making excuses for child abusers? Why do so many feminists support abusive mothers ahead of the children and their fathers, while others engage in publicly scorning activists who are trying to address ideologically-driven problems related to that abuse?

Feminist ideology presupposes that women are unfairly disadvantaged (theory of patriarchy) and therefore deserve top priority when it comes to getting social and material support. People who hold this horrible misconception of social power have a track-record for overlooking existential threats to children who live in abusive homes.

From an authentically egalitarian perspective, this is a kind of denialism that lingers like an elephant in the room. If feminism were a movement for equality, would it not start by distributing compassion evenly between the interconnected people in such grievous conditions?

With just a few fortunate exceptions, children raised by single mothers are less successful in life compared to kids raised in families with fathers. While informed feminists and egalitarians generally agree that the most likely people in society to abuse children are women who have also been abused themselves, egalitarians disagree with any presupposition or assumption whatsoever that women possess innate moral superiority or any kind of instinctively greater competence around parenting.

Moreover, egalitarians are far more likely to acknowledge the importance of ensuring fathers have a right, as well as a responsibility, to be in their children’s lives. The fact is, involved fathers help prevent child abuse and produce healthier, more successful adults. But do they have the right to do that? Society would best be served by facilitating men’s healing journeys and interconnections with children, not by accusing Men’s Rights Activists of being a bunch of “whiny” losers from the class of oppressors.

Egalitarians have no time for attempts to abdicate responsibility in cases of child-abuse, and consider primary care-givers to have the most significant impact on the lifetime well-being of human offspring. Child abuse is well-understood to have downstream social impacts.

An egalitarian solution involves steadfastly supporting fathers’ rights while placing long-term priority on the welfare of children, rather than framing the issue in terms of “patriarchy”. Egalitarianism involves acknowledging all of the facts and the feelings at the roots of social problems. Consequently, egalitarians consider feminist ideological presuppositions to be dangerously imbalanced and harmfully dysfunctional to the process of cultivating safety.

Violence has roots, so does suffering. Some of those roots are ideological. The issue of child abuse illustrates some of the differences between egalitarianism and feminism. The failure to equally distribute compassion impairs the cultivation of safety – as demonstrated by the way feminists address the issue of child abuse and treat its victims.

Egalitarians consider this distribution functionally and centrally important to resolving the problem. As the case of child abuse and the long-term cultivation of safety illustrates, feminists distribute compassion based on the assumption that women are oppressed and publish textbooks in which they claim females cannot be sexist despite obvious examples to the contrary.

Andrew Nuttall At the age of 7, Andrew was in an airplane crash near Slave Lake, Alberta. He survived. At the age of 24, he was diagnosed with Hodgkins Lymphoma while living in Kumi, South Korea. He went home to Canada and after a year of treatment, and he survived again. 6 years later, he ran three half-marathons.Today, he lives in beautiful Victoria, BC. He reads, plays golf, and practices yoga between writing jokes, partaking of the local music scene, and actively addressing environmental, health, and egalitarian issues through social media.

Why Being The Asshole, The Nice Guy, and Being Yourself Never Seem To Work »