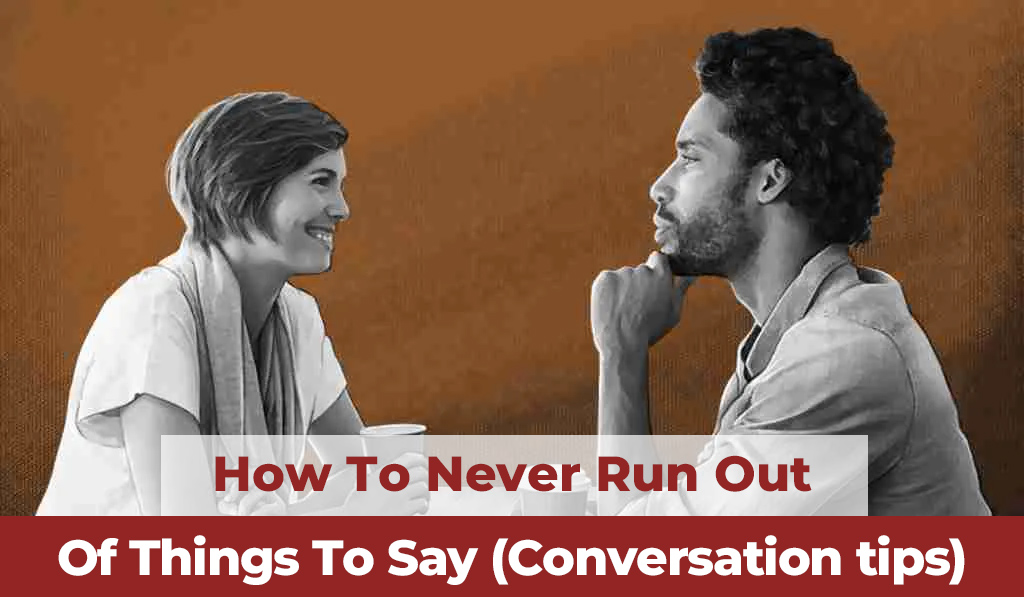 How To Never Run Out Of Things To Say (Conversation tips)

Have you ever had a conversation with a woman that died faster than it started? Then you know how the awkward silence feels. Followed by, “It was nice meeting you….” as you watch her walk away.

Also check out: How to meet women in public and How to win any negotiation now.

How can you keep a conversation going with a complete stranger, and create that “connected” feeling?

Learn conversation tips to never run out of things to say:

And much more! Keep reading to supercharge your conversation skills.

1. How To Never Run Out Of Things To Say With A Woman You Just Met

Since I’m a dating coach, the first thing my students usually ask is, “How do you keep a conversation going? It always seems to go dead after opening.”

This is actually simple to do.

To start, you have to have the right mindset. I’m not talking about emotions here, it’s about the way you think about meeting women.

Most guys go into a conversation with an attractive woman trying to impress her. It’s always about what they do, what they have, who they know, and how interesting they are. “Look at how cool I am, I do stuff.”

This is an insecure way to present yourself to a woman. It demonstrates a lack of confidence and projects insecurity. This is the try-hard approach to attracting women, and try-hard’s are never cool.

Want to build your confidence with women? Try one on one confidence coaching.

A cool guy is cool without having to demonstrate anything.

In a conversation, he talks about things because he want’s to. He also never gives away too much information about himself, at first. There’s a bit of a mystery about him which leaves an information gap, and that creates curiosity.

2. Why You Run Out of Things to Talk About

Guys run out of things to talk about because they’re trying to think of things women want to hear.

This means scrutinizing all of your thoughts trying to find something special. Something that will impress her. That’s a sure fire way to create a mental block, and stump the conversation.

It’s also a horrible way to have a have a meaningful conversation.

When you’re talking to your friends do you ever worry about running out of things to say?

The reason is because we don’t care about saying “The wrong thing” to friends. We talk naturally and carefree.

It’s easy to get stumped and run out of things to say if you care too much about someone liking you. If you talk, and clear your mind of the need to impress others, it becomes so much easier.

Of course, that’s nice to say but most guys also want a technique or structure to follow. Don’t worry, it’s coming below.

To have a conversation that flows without awkward breaks, focus on her favorite topic, herself.

Everybody loves to talk about themselves. If you focus on her, she’ll think you’re the most interesting man in the world.

It also makes it easy find a topic to talk about because the topic will always be her. This makes sense in more ways than one. You’re talking to someone new and should learn about her.

A lot of “dating coaches” advise not to say boring things like “What do you do?” but this is garbage dating advice. It’s not what you’re saying that’s most important, it’s how you say it.

3. The Truth About What You Say In A Conversation

Imagine someone walking up to you at a party.

His shoulders are rolled forward, head is down and he’s looking at the ground. Not only that, but his hands are in his pockets. He also walked up to you turned at an angle instead of standing squarely facing you.

He doesn’t make eye contact, and when he speaks it’s very quiet and without enthusiasm or energy. Sounds depressing right?

And I haven’t even gotten into the conversational topics yet, but the image of a depressed person with no confidence is clear.

Regular guys are getting dates with attractive women. Learn how you can too by clicking the button below:

I Want to Know More

You would assume that this person would be talking about how his mother just died, or maybe that he’s going through a breakup, but no.

This person starts talking about the raise he just got, and he’s going on a one month vacation to Mexico. “I’m really excited, I just got a huge raise and I’m going to enjoy the hot sun on a beach in Mexico.

Keep in mind they he is saying this while looking at the ground, shoulders rolled forwards and his hands in his pockets. That persons voice has no life in it either.

Would you believe his words over his body language? It’s an image that’s not congruent. Most people would be highly suspect about how authentic he’s being.

This is the same when you are asking seemingly boring, mundane questions.

The topic of the question may not exciting, but you can change the way it feels by the way you say it. Deliver that question with strong eye contact, standing straight, taking space and with a slow, confident tone of voice, and you won’t sound boring.

In a conversation, think delivery, not topic matter.

Here is a technique which will ensure that you don’t run out of things to say. It’s a simple way to keep a conversation going and keep her interest in chatting.

Using this technique you can learn a ton about the girl you’re talking with. All of the things she tells you will come in handy while you chat.

1) Ask a ‘what’ question + a cold read – After opening, ask a simple question about her but bundle it up with an observation “You look like you work in a dental office or hospital. What do you do?” The observation or cold read makes the question conversational instead of interview style.

2) Pay attention – You need to listen to what she’s saying and not think about your next move. This will also help overcome shyness because you won’t be thinking about yourself. Self consciousness is a sure way to stifle the chat.

3) Repeat her words back to her – Now she’s shared something about herself, so repeat the most important point back to her in your own words. This will have the dual effect of demonstrating that you were listening, and also clarify any miscommunication. You’ll understand her better and she’ll appreciate your attentiveness.

4) Add your opinion – Again, to make it conversational and not like an interview, tag your opinion onto the question.

5) Dig deeper – To really create a connection it’s going to require going below the surface and getting away from the superficial opening details. Find out why she’s into that work or interest. Why did she get into it? This will tell a lot about her personality. It will also require her to open up and share something about herself. When people open up to others it creates a feeling of trust and connection. This is important if you want to see her again.

6) Recall – Since you were paying attention, you’re going to remember the different things she said earlier. Recall one of the other topics she mentioned and re-add it to the conversation. This works especially well if it’s connected to what she was just saying, or if the conversation started to run dry. Just say, “So, you mentioned that you also like X. How does that connect to your work?”

This conversational approach will create a snowball effect because you’re learning different facts about her. Each fact or detail could potentially become a conversation on it’s own.

The whole time you’ll be learning about her too. This will give you a chance to create a meaningful connection.

5. Things to Say to Keep a Conversation Going

You should have tons to talk about by focusing on her. However, you may still run into some dry patches. Here are some things you can say to fill in the gaps and keep the conversation going.

If you’ve already been chatting for a bit you might want to end the conversation on a high note. No reason to drag it on too long.

Tell her, “I’ve got to get going, but we should have a coffee sometime.”

That’s a good way to end the conversation and get her number.

6. Is It Normal for Couples to Run out of Things to Talk About?

It’s normal to have times of silence with our significant others. We tend to spend a lot of time with our girlfriends or wives, so it’s not possible to be talking non stop. Sometimes we want to think to ourselves, too. Having this spaces will allow each person to recharge.

If these silences are long and awkward, or conversation feels forced, there might be other problems. It could be your own insecurity, or there may be a real lack of connection.

Take a step back and stop forcing yourself to make a conversation happen. Often this will be enough because your stress levels will drop, and you’re mind will get creative again.

Awkward silences don’t necessarily mean death to a conversation. What matters is how you react to it. If there is a silence just smile a bit, pause to give yourself space to think, then ask another question. A lot of the time she’ll end up filling in the silence.

5 Reasons You Keep Getting Numbers but No Dates »