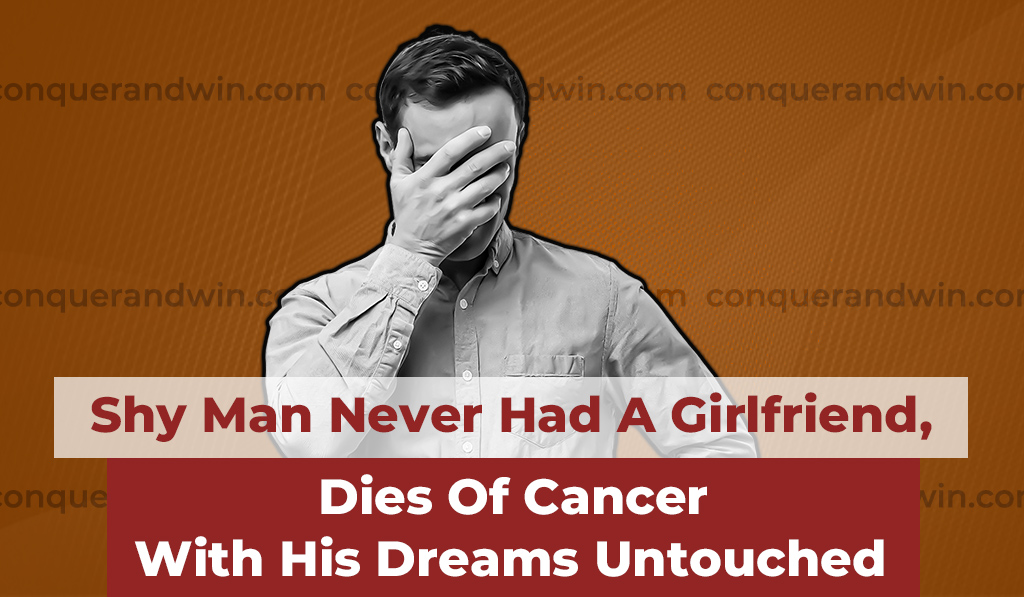 Shy Man Never Had A Girlfriend, Dies Of Cancer With His Dreams Untouched

How many people die without ever having lived their goals? The true story below illustrates the reality of life; unrelenting, and never stopping for anyone.

None of us knows how long we will be alive for, all we can do is predict that we will probably make it to whatever average lifespan there is for the region we live in.

Even making it to a ripe old age our lives are fleeting, and many people never even make it that far, often finding themselves out of time without having had a chance to experience any of their dreams.

Every time I hear someone saying "tomorrow" I cringe, and you should too, especially if that person is you.

The only thing you can truly be certain of is right now, maybe till the end of the day but there is no guarantee there either. Tomorrow is a horrible way to think about running your life. Tomorrow happens so fast and spans the course of years before the realization that our tomorrows are running out, and allowing more time to pass our dreams will only become more difficult to accomplish.

If you start today then your tomorrows will be blissful and fulfilling. Not only your tomorrows but the present moment, the only guaranteed moment we have, will be so much more satisfying and meaningful.

A lot of the people who come to me for coaching end up fearing taking the dive and learning to approach beautiful women, confidently, because they allow their fear to get in the way, and tomorrow is a lot easier to swallow.

Those who do make the commitment can start living tomorrow, today, invigorate their lives and find great women for the kind of relationships they want.

Don't die with your music inside of you; whatever it is that you've been putting off you really don't have time to wait, so start making it a reality today.

The story of my dead Uncle. 27 years old. Diagnosed with Pancreatic Cancer in Fall 2014. Never had a girlfriend, never pursued his dreams of working in Hollywood. And the motivation he gave me to realize that the word, "Tomorrow", should be a word that should be banned from your vocabulary.

My uncle was diagnosed with Stage IV Pancreatic Cancer in the Fall of 2014. The doctors basically told him he had roughly a month to live, and that he should get his personal matters in order.

Unfortunately my uncle was in his late 20's, and really had not much in the way to get in order. He always dream't when he was younger of working in Hollywood and becoming a film director. He loved films, and loved to write short stories in his free time. He was a very artsy and creative person. There was a time, when he really serious about sending his scripts to Hollywood, and even move to Hollywood and see what could happen.

That said, he graduated and found a job as an accountant. Solid 9-5 job. Solid pay. Good benefits. Most people wouldn't complain really. But, my uncle, he felt spiritually bankrupt. Whatever social life he once had back in college was now dissolved to waking up, go to work, go back to bed, and rinse-wash-and repeat for the next day.

He stopped focusing on things he loved such as writing, and ultimately stopped pursing his dream of working/moving to Hollywood. This depression of sorts also thwarted on any attempt of him finding himself a girlfriend either. You see my uncle was always a socially awkward guy, and it was always difficult for him to muster enough confidence to actually talk with girls, let alone ask them out on a date. So he was pretty much alone and single through his whole life.

He always swore that he would wake up "tomorrow" and focus on working on a new script, or focus on editing one of his old scripts that he would send to Hollywood. But tomorrow never really came. He also had ambitions of finding a girlfriend, and really try to become more socially outgoing. He bought a bunch of self help books on how to be more social, and how to ask women out on dates and so on and so forth...But once again they just sat on his bathroom floor gathering dust. Ultimately he became complacent with his life situation, and his ambitions and dreams always became a never ending repeating loop of "Tomorrow"

My uncle was quite understandably devastated. The depression he already had, only became worse. There wasn't really much of outside family either to give emotional support. It was just me really. I did the best I could to cheer him up and motivate him, but quite honestly I stopped because it was just so fake from my part.

He was alone. No wife, no kids, nothing. And the dreams he once had of working in Hollywood now became nothing more than simply a "dream". He knew he fucked up his life. He always thought there was time to fix his life and follow his dreams..I guess that's why he relied on tomorrow so much.

When I came and visited him during his hospice stay, he would always tell me about these new story ideas he had, and would actually write them down and complete more work in the span of a few days then he had in years. He became obsessed with his writing, almost as if it was a facade to hide his pain about the blunt reality of him having less than a few weeks to live.

That said, he told me about a dream he had. How he was able to accomplish all of his dreams. How he lived in Hollywood and was directing this big blockbuster, and how he had a mansion in Beverly Hills and how he had a wife that looked like a young Denise Richards, and how they had beautiful kids and a dog. How he had this perfect life......And how in this very same dream he was also diagnosed with pancreatic cancer, and was told he had a month to live, but felt perfectly happy to go.

Then he woke up, realized the doctor told him he had a month to live about 2 weeks ago, and just decided to go back to bed.

TLDR: Screw the ever-loving shit of tomorrow. There is no tomorrow. There is only today. If you have a dream, if you have goals, no matter how big or small those dreams/goals are. Do them NOW. Don't rely on tomorrow, because tomorrow is so fucking unpredictable. Rely on today, and each and every hour your given. Because that 24 hours you have, where your probably browsing reddit trying to spur up some motivation for something you've been dreaming of but can't get your ass off the computer chair to do? My uncle would KILL for those 24 hours. Fuck time. You have no time. You only have today, and today only. Make the most out of it.

His wife cheated on him for 10 years: Don't waste your life says man on Reddit

The Cure For Bad Results With Women? Stop Trying To Be Yourself »