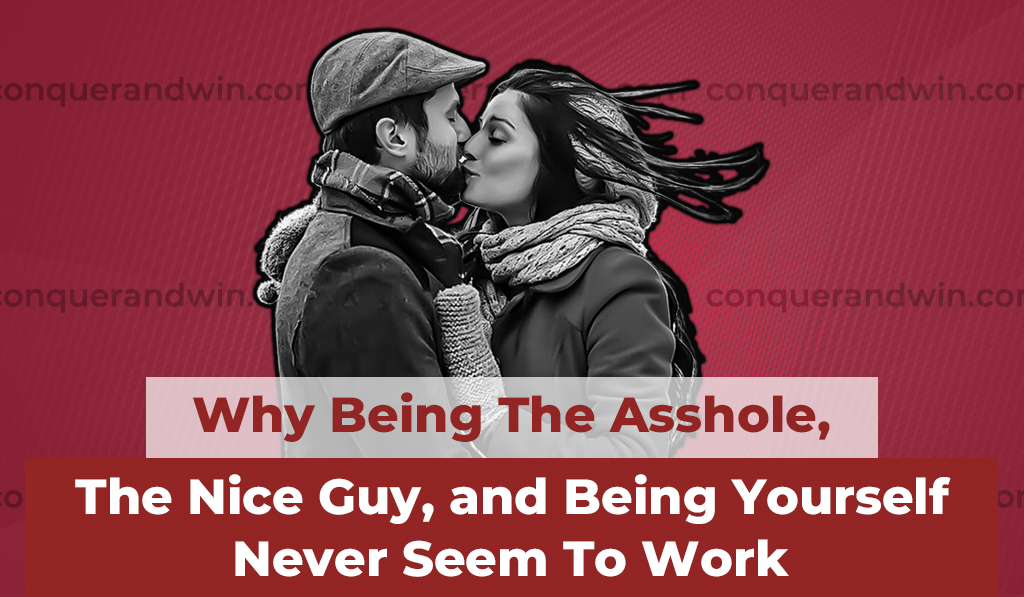 Why Being The Asshole, The Nice Guy, and Being Yourself Never Seem To Work

I tell him, “I’m a dating coach for men”…(bracing his response like I normally do, which usually consists of them telling me about all their problems with women OR telling me that men just need to have some balls).

Also check out: How to meet women anywhere (Mega guide)

The teller then tips his head to the side in thought and says out loud, “Ya know…people always say you have to be an asshole…but that doesn’t work…then they say ya gotta be the nice guy…that doesn’t work either…then eventually they just say BE YOURSELF…but how do you even do that?!”

I can’t help but laugh and know exactly what he’s talking about.

Nobody wants to be known as The Asshole that mistreats women…

In the same turn, you probably don’t wanna be known as the Nice Guy that GETS mistreated.

And LET’S BE REAL, hearing “Just Be Yourself” is about as corny and elusive as “Just Be Confident”…

But women SEEM to want the Asshole, right?

And then again, they also SEEM to want the Nice Guy…right?

But everyone knows the ANSWER is to “BE YOURSELF!”

The problem isn’t in which one you have to be…but rather how to be all 3.

So here’s why being The Asshole, The Nice Guy, and Yourself isn’t working out…and how to make all 3 work for you to get the women you want:

You know this guy…he’s a total frat boy BRO in his 20’s…a bottle poppin, jet setter in his 30’s…and a juicing, gym-going, somehow-still-not-married ladies man in his 40’s. And if you’re a guy with half a brain, he probably looks like a total douche to you.

Now these things may not sound ideal…and because of that you probably do NOT wanna look like The Asshole to women (or at least I’d HOPE not).

And yet women still want them!

What Being The Asshole Means To Women…

OK now how does THAT guy sound to you?

He seems pretty awesome, am I right?

And THIS is The Asshole we want…not that other guy up there.

And we’ll get to that in a second…

Cuz now we have to address the other extreme…

2. Being The Nice Guy

*cough cough* FRIEND ZONE GUY! *cough cough*  Am I right…?  This is the guy who looks like the little lap dog who comes running on command only to get shat on while she runs into the arms of ANOTHER man.  Of course this is what he may SEEM like to you.

OK while The Asshole sounded like a total bad guy, Mr. Nice Guy sounds like such a…CHUMP, right?!

But here’s how WE Ladies see him…

What Being Him Means To Women…

How WONDERFUUUUUUUUL does HE sound?!?!?!?!  *insert starry eyes glazed over in admiration and adoration*

But we DON’T want a doormat!

And that’s where being The Asshole needs to come in…because it’s not gonna cut it to just be Mr. Nice Guy…and that’s probably why every guy on the planet is TERRIFIED of becoming him.

This is the elusive advice we hear all the time and consistently roll our eyes at.  It’s corny!  It’s redundant!  It’s common sense!  And yet most of us have no idea HOW to do it…and THAT’S the problem.

What Being Him Means To Women…

Why “Being Yourself” Seems to Suck

The problem with “being yourself” is that people don’t know HOW to do it.

That’s you ACTING a certain type of way because of what society told you to do or not do.

THAT AIN’T YOU BRO!

I make my clients write down 10 things that are 100% unique to them on our first sessions and I’ve seen things like:

These are all examples of “Being Yourself” that my clients didn’t even realize they were doing.

Being Yourself means saying or acting on your unfiltered in-the-moment thoughts, reactions, feelings, and experiences.

Because no other man on the planet will EVER have your unique personal thoughts, feelings, or experiences.

In the same turn we want the guy who can see we’re having a bad day and NOTICE to say, “You seem really stressed…what’s going on?”…without taking it personally or getting mad at us for it.

We want BOTH those guys…and both those guys can only come out when you’re Being YOURSELF.

The easiest way to see if you’re “Being Yourself” is to ask yourself, “Am I doing/not doing this because I actually WANT to or because this is what I think will WORK/make me look less stupid?”

And the more you fall in line with what everyone else is doing…GUESS WHAT the more you seem like a guy we can ignore on AUTOPILOT.

…and the YOURSELF that’s unlike any other guy she’ll ever get to come across.

Check out: Romantic or needy? The real reason guys get tunnel vision with women

Being “nice” not getting you anywhere with women?

Tired of weekends alone? Learn how to attract relationship quality women in your city.

Tell me about coaching!

Jessica J started out en route to become a Marriage and Family Therapist, only to find that her passion was more geared towards sex and dating.

Jessica runs Level Up Seduction and has launched several online instructional programs. She is now the resident dating coach on Playboy Radio’s, The Couch, and continues to assist men in all things dating, sex and self related. Find out more about Jessica’s coaching and services at levelupseduction.com.