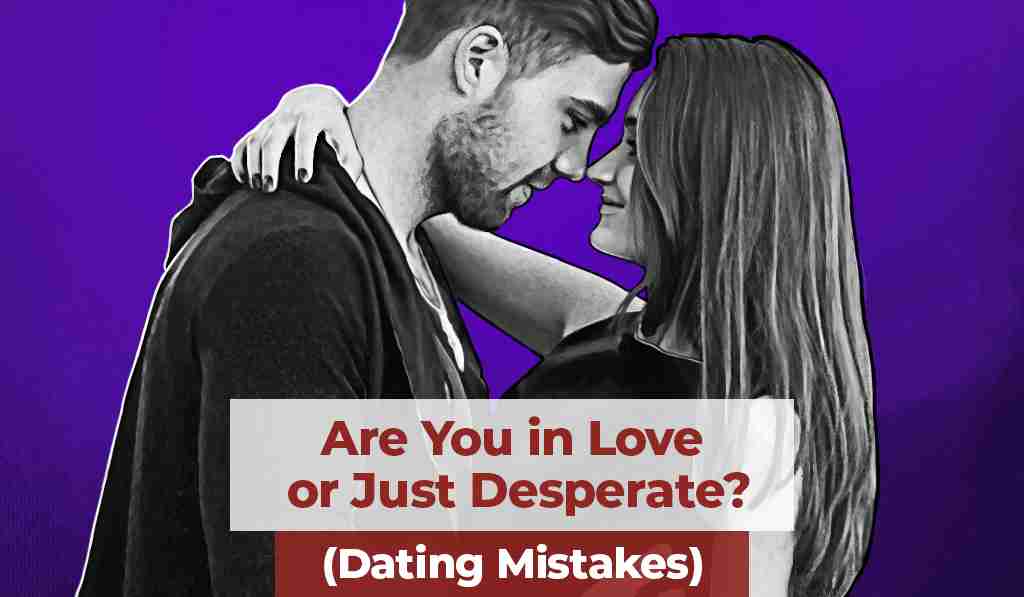 Are You in Love Just Desperate? (Dating Mistakes)

So you're falling in love and that's great, but is it actually love or is it just lust, or do you just not have any other options? I get calls and messages from guys all the time who say they're in love or they really like a girl. And when I learn the details, it's almost always the same. The guy doesn't have any other options. He barely knows the girl, doesn't know how to meet other women, and he hasn't had a date or a relationship in a really long time.

In this article, you will learn the following:

Basically, he's really hungry, or I guess we're saying, I'm thirsty now. In fact, a client of mine came to me a long time ago and told me he was in this program because he met a girl and he really liked her. And I was like, that's great. But I was a bit confused. I was surprised because I hadn't heard anything about any girls he was dating. So he met this girl, an approach that went well.

Obviously, she went on a date with him and now he really liked her. So, he's in this program. He's going to stop meeting other women, right? Well, guess what happened? He is back in this program the next week, and that girl basically just ghosted him. After the first date, she wasn't replying to his text messages anymore. And a client recently had a similar occurrence with an instant date and it went really well.

He actually ended up going back to her place because she wanted to introduce her cat to him. But anyways, I think he met the wrong cat and he left and he went to work that day and he told me he really liked her. Lo and behold, she ghosted him as well. She just didn't reply to his text messages anymore to set up another date.

But, it's not a choice if there's only one option. And even worse, if you don't know her, if you don't actually know her personality and how good she is - and it's basically just she's really cute... she's really attractive. That's just lust, right? You don't really like her. You don't really love her. It's just this is coming from the balls, right? This is our natural instinct to kind of gravitate to someone who is really attractive like that.

Also read: How to Get Dates? Simple Conversation Openers

And when you don't have other options that can feel like love. Now, if you're shopping while you're hungry, everything looks good, right? If you're at the checkout aisle and there's a chocolate bar there, you know, it probably doesn't make you feel good in the end. But at the moment, you've got to satisfy that hunger somehow, right? It's the same thing with dating.

That happens over time. And you're going to be able to figure out if she's actually relationship quality or just short term quality. Now, loneliness makes all of this even worse. If you're lonely, it's the same thing as being hungry, and you're trying to fill in that void so you can get rid of that negative feeling weight. It's not a good feeling. I've been there before, but don't fall for this trap. The best thing you can possibly do is expand your options so you can stop being lonely and also work on yourself.

Because usually, loneliness isn't just about having somebody else in your life. That's a big part of it. But there are usually other personal things going on as well. So what's the cure for this loneliness and what's the cure for having a lack of options which leads to desperation? Now, obviously, that cure is to be able to meet other women and have the options. When you come across somebody that can actually start a conversation that goes somewhere, make a connection, and get a date.

And the practical steps in doing this, depending where you're starting from and how shy you are, how much experience you have with women, is basically a start. Start small by saying hi to people as you walk by. Just a friendly good morning in the morning as you're on your morning jog or a walk, or you're walking to work. It doesn't matter, just say hi to people.

Start getting used to this kind of contact. The best time for you to do easily is when you have a captive audience, when you're buying something, chat up the waitress, chat up the barista, chat with the person at the checkout aisle - and it doesn't have to be a woman.

Just start talking to people, start getting into conversations and learn about them too, though. Just stick to superficial things. You can start there for sure, but try to find something about them that stands out, try to find some kind of detail. You jewelry you can ask and question. It doesn't really matter. You don't overthink it, but you seem to get chatting and start learning the whole process of making connections with complete strangers because this will help you later on.

Now, the third thing you could do to start meeting women and learning conversation skills and really building up her confidence is to actually approach directly. I'm going to put a video link in the description below so you can learn more about how to do that.

But basically, you're walking up to women. I don't know exactly why you're talking to her, and again, check with the details in the video link below, and then that's going to lead to good places or just to conversation. And that's OK, too. But you're going to build your confidence just by the act of approaching these women. And of course, you want to do it properly. I know probably for a lot of you guys you are thinking, oh, that would be creepy.

And yeah, nobody wants to be creepy, but trust me, it's not as complicated as you may think. But any case, the act of approaching people that approach a woman is a major personal developer, personal developer.

Also read: 10 Reasons Why You Should Hire a Dating Coach

I think that's a term because I want to use personal developer. As a major personal developer, because you have to overcome your own anxieties and fears about approaching strangers and learn the social skills to do it properly so you can make connections with people at the very least, not push them away. To sum it up, try and remember the following tips:

Do you want personal help, your confidence, social skills, and meeting more women so you can get into great relationships?

If so, check out the LinkedIn description below to learn about how one on one coaching can help you to meet more women and build your confidence, and until next time, conquer and win.

10 Signs a Girl Is Wasting Your Time »