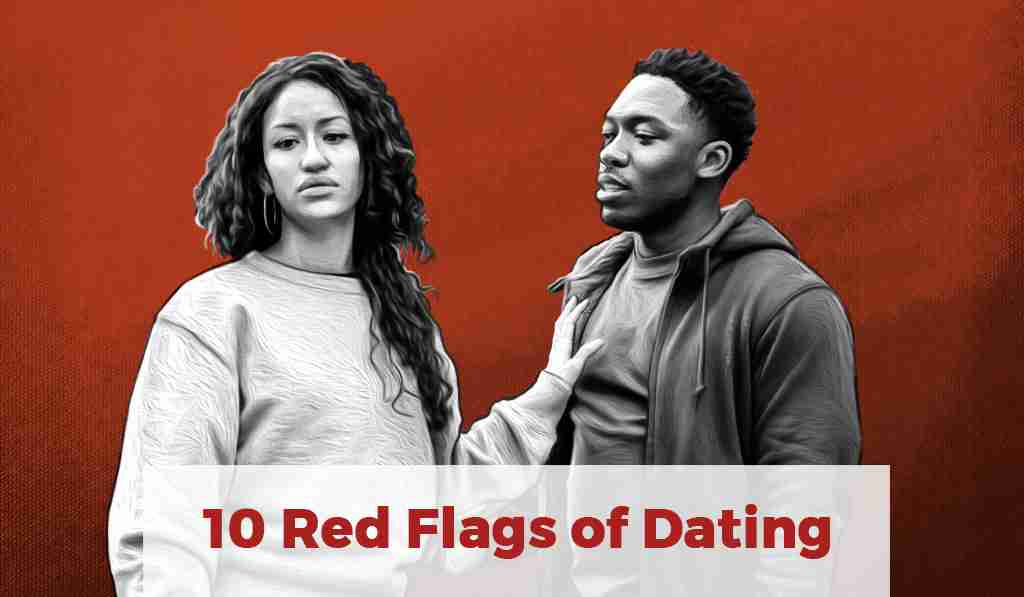 What are the red flags of dating?

Have you ever dated a demon? When you met you just clicked and it seemed like everything was perfect then. But suddenly "she changed" and everything went to hell, and she was treating you like shit.

Well, it may seem like everything changed suddenly. Chances are you were ignoring the red flags that she was giving you right from the beginning.

And usually, as men we choose to ignore these red flags because we're desperate. Either desperate for sex or desperate for love and attention or whatever that source of desperation is, it can lead us into really bad decisions.

It's kind of like shopping when you're hungry and all those chocolate bars are the checkout aisle look really tempting and cheap and easy.

But after you eat them, you don't feel that great. You just wasted your money on something that doesn't actually nourish your body.

Well, getting into a bad relationship because you ignore the red flags, because you are desperate, is basically the same thing as eating something that doesn't nourish your body. And you're not nurturing your soul or your mind. So before you go jumping into a relationship, pay attention to these red flags. And if you see them - run.

The first red flag to look out for is a drama queen. If you start dating a girl and the first thing she does is start talking to you about all of her crazy exes and all the problems she has and all the drama she has, even worse, if she wants you to fix these dramas - run away.

Second red flag to lookout for - bar girls. There's nothing wrong with bars and it's okay to meet somebody there. But do you really want to be with a party girl if you're looking for a long term relationship?

Usually, the demographics in bars are not that great for finding a relationship in the first place, even though there are exceptions. But as a rule, the bar is a terrible place to find a girl. You do not want to find a party girl for your relationship. It will only end up in heartache. Even if you have a relationship with her.

So chances are she's not really going to actually commit to a real relationship. Of course, it's a big generalization. But on average, if you want to get something healthy for yourself, you're not going to go to the sweets aisle.

And I've seen cases of guys who end up marrying these girls and it continues to their entire marriage and it just sends these guys into hell. And the common theme is the guys always hoping and thinking she's going to change eventually and he thinks he's going to do something that's going to show her how much he loves her and she's going to stop accusing him of cheating.

But it's never going to happen.

Also read: How to Get a Girlfriend (The Mistakes That Keep You Single)

If she's not showing up, she's cancelling all the time. She's putting you second. She's not following through on what she says she's going to do, then you better take off because that's never going to end and it's just going to get worse.

Red flag number five is a dual personality. One minute she's really, really happy and you're the greatest thing on the planet and you feel so good. But the next minute she becomes a demon and you're the worst thing in the world.

Everything is horrible and there's nothing you can do to make things right. And you'll constantly go on this roller coaster back and forth between Dr. Jekyll and Mr. Hyde. Basically getting her super happy personality and then getting a really sad, depressed personality. And it's basically a tool of manipulation.

She knows she can manipulate you because you have no spine and you'll just do what she says every time she gets sad, you do anything to make her happy again because you love that feeling, when you go back into the happy her, you're dying to get that adrenaline rush.

You're dying to get those endorphins from getting her back in the happy mood. And it's a huge responsibility take on somebody else's feelings. Nobody's responsible for her feelings except for her. So stop trying to fix her and tailoring everything you do to try to keep her in a happy mood.

If she's constantly switching between really happy and really sad, that's a huge red flag and you don't want to be manipulated like that. So it's time to get out of there.

Women With No Ambition

Red flag number six for a long term relationship, of course, is no ambition, she is coasting an entrentry-levely level job and she doesn't have any definite plans for what she wants to do in the future.

She doesn't have to want to become a millionaire or anything like that. But she should have some ambition and some plan for the future, some idea where she wants to go and it should match your vision for the future as well, if you want to have a happy long term relationship.

Makes You Her Errand Boy

Number seven, she makes you her errand boy. Have you ever been a woman's errand boy? You in basically putting together all of her IKEA furniture, driving around, getting your things, doing stuff for her, trying to fix your problems, hooking up or TV or Internet, fixing all of our other technical stuff.

And in the end, you just get sent home with your empty right hand. If that's the case, then you should stop right now because all of these errands you're doing for her are not making them more attractive to you. And I've been there and done that.

Unfortunately, I put some woman's furniture together, do badly, only to be put on hold and left on call basically for the next time. She needs me to put something together for her. No matter how many other problems you fix her computer or any other hardware software she has, she'll never become attracted to you and you'll never get her as your girlfriend.

But there are studies out there that would show that there is a strong correlation between divorced parents and people getting divorced in their future relationships. And it makes sense, at least of somebody parents get divorced when they're a child because that creates a huge impression on them.

And they may not take marriage as seriously as somebody who had a happy example of a family when they were growing up. Again, this is just a correlation.

If you find a real keeper and her parents were divorced when she was a kid, it doesn't mean all is lost. But just keep an eye on that.

A healthy relationship involves give and take, right? It shouldn't be just you giving and her taking the entire time. She should actually care about you and want to do stuff for you as well and want to give you stuff as well.

She might treat you sometimes for dinner or maybe she'll cook for you, but if she's not reciprocating, it's a really bad sign that your future relationship is going to probably go down the drain or you are going to be living in constant frustration because she's not actually showing she cares for you.

Manipulating You with Sex

Number ten is using sex as a motivator, basically using sex like a carrot dangling in front of your face and making you jump through hoops to get you to do stuff. This is not a healthy way to have a relationship. And if she's trying to motivate you with sex and manipulate you that way, it's time to take off.

Which reminds me of a funny joke I saw from one comedian. I forgot who it was. Pretty famous guy. And goes something like this. So I met this Russian woman and we went for a coffee and we sat down and first thing she started explaining to me was:

" I will not have sex for six months."

''I will not have sex for six months when I start dating a man.''

And so, I sat there and I thought about it a bit. And then I stood up. And before I left, I said, Well, I guess I'll see you in six months.

In any case, don't let anybody manipulate you with sex. That's also a one way road and it's not a good one. Even if you actually get the prize in the end, she's going to continue using sex to manipulate you.

So it's time to check out.

Sex should always be mutually beneficial and mutually desired when you're in a relationship, not used as a tool to make you do things or to punish you if you don't do those things.

In any case, there's a lot of other red flags, too. I probably missed a bunch.

Leave a comment below for any other red flags you should look for in a relationship when you start dating a woman.

What are some red flags you simply cannot ignore when dating?

What are some red flags to look out for before you start dating? Whether you're checking someone out as a potential date, or you've already started dating, pay attention to these red flags. This will summarize some of the red flags already mentions above and add a few more.

Why are some daters so needy?

Needy behavior usually indicates insecurity. People who behave needy are trying to fill in a void to make themselves feel better. Depending on others to feel secure is one of the worst ways to get emotional fulfillment, and if you find yourself with a needy woman

How to Handle Rejection From Women »